Today’s episode of Khatron Ke Khiladi 10 starts on a real dynamic note, as Rohit Shetty explains the stunt to the ticket to finale racers. The stunt is to park a car, but if the car touches the obstacles four times there will be a blast in it. All the racers are stunned to know about this task. But, it was Karan and Balraj who were more nervous as they had to perform the stunt. First, it was Balraj’s turn to perform the stunt. After some time of starting the stunt Balraj’s car comes in contact with two obstacles very soon, then the third and boom goes his car. Next, it was Karan’s turn to prove his love for cars, he starts off the stunt pretty confidently, but faces some hardships as he carries on with his stunt. Karan wins this race as he completes by touching just one obstacle and joins Tejasswi in the final stunt of Khatron Ke Khiladi. The contestants and Rohit Shetty make some fun of Balraj’s performance.

Now, all the contestants move on to the location of the next stunt. Now it’s time for the final stunt for the race for the ticket. This stunt is to be performed by Karishma, Dharmesh and Shivin. Rohit Shetty explains this amazing stunt to the performers. Dharmesh goes in first to perform this stunt. Dharmesh shows of his dance skills in this stunt as the stunt is all about balance, D completes the stunt on a great note impressing every other contestant and Rohit Shetty. Shivin goes in next to give his best for this stunt. Shivin finds it very difficult to start the stunt as he starts feeling giddy. All the other contestants try to motivate Shivin to start the stunt, but Shivin is not able to do so. In the end, Shivin aborts the stunt, this makes Rohit Shetty very unhappy. Karishma gets ready to go in next. Rohit Shetty orders to start the stunt without allowing Shivin to get down from the platform. Karishma starts her performance confidently and completes the stunt, while Shivin is still found to be stuck on the lower platform. Shivin truly has created a new history in all these years of Khatron Ke Khiladi as everyone makes fun of him. With just a difference of 9 seconds, Dharmesh joins Tejasswi and Karan in the Ticket to Finale stunt.

It was now time for the Ticket to Finale stunt. The final lap to get a direct entry into the finals. Before the stunt, as usual, Rohit Shetty plays a fun question-answer game with Tejasswi. Rohit now explains the ticket to finale stunt to be performed by Tejasswi, Dharmesh and Karan. Tejasswi goes in first to perform this stunt, she starts of the stunt but panics and when she is taken out, she narrates that she blacked out while performing it. Karan goes in next and aborts after removing some flags. Lastly, we will see Dharmesh performing the stunt as he goes in with great energy and also gives a great performance. So the final results are out and Dharmesh wins it by removing 12 flags. He also becomes the first finalist of Khatron Ke Khiladi 10. 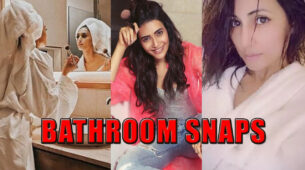