Yeh Hai Mohabbatein 27 August 2019 Written Update of today’s episode we see Raman thanks Arijit for helping his family but also becomes suspicious of him. Today’s Yeh Hai Mohabbatein 27 August episode begins with Ishita (Divyanka Tripathi) trying to prove to everyone that Raman was the real Raman and not am imposter. She told Karan that she had the voice notes sent by Raman. She asked him not to spy on Raman. She told Karan that truth serum would be dangerous for Raman. She scolded him for doubting on Raman and putting his life in danger. She asked Karan not to do anything against Raman. Karan apologized and told her that he cared for her and wanted to keep her safe. Raman learned about Karan’s suspicion and was hurt. He scolded Karan for not accepting him because of his face. He asked Karan how he could conspire against him. He felt ashamed that his family was suspecting him. He couldn’t believe that his children wanted to give him truth serum. The children apologized to Raman.

Raman was enraged and asked Karan to get out of his house. He wanted to make Karan believe that he didn’t come to harm the Bhallas. He shouted out his identity. He told Karan that he couldn’t spread his doubt in the family members’ mind. He pleaded that he didn’t remember anything, but he couldn’t see himself as an outsider in his family’s eyes. Karan didn’t give up. He tells Raman that he cared for Bhallas, he had done everything to secure Ishita. He told Raman how much Ishita had tolerated in his absence. He told that the enemy was dangerous and could go to any extent. He wanted to be sure that Raman was real and Ishita was safe with him. He told Raman that he was just taking keeping it safe to support Ishita. He asked Raman to be in his place and think. Raman understood Karan’s concerns and hugged him. He apologized to Karan.

He was happy that Karan was protective of the family. He felt relieved that someone would be with his family to look after them even in his absence. He told them that he was Raman, but he couldn’t prove it. Karan believed his heart and emotions. Arijit was happy to strike Bhallas again. He was up to a new plan. Bhuvan asked him about his family. Arijit angrily hurt him. Bhallas decided to get Karan and Ruhi married. Ruhi got emotional. Raman wanted to meet Sudha to fix the marriage. Raman and Ishita were reminded about the puja by Arijit. Arijit told them about the puja event. Yug made sure that the event was a success. Arijit couldn’t believe seeing them so happy. He couldn’t see the Bhallas at peace. Raman hugged Arijit to thank him for all the financial help in the project. Arijit told Raman that he was doing this for his own motives. Karan told Raman that Arijit had told him that Raman could be an imposter. Raman didn’t want to trust Arijit. Mani told him that Arijit was there to sabotage the work. Raman told them that they had to behave well with Arijit, so that Arijit didn’t doubt on them.

Arijit didn’t want Bhallas to be united. He wanted revenge for Neeti. Ishita didn’t want anything to go wrong in the puja event. Simmi advised her to share Raman’s voice notes with the family so that everyone stayed by his side to help him in the event. Ishita didn’t want to take big risk. She wished Raman didn’t cause any trouble in front of the investors. She felt Simmi’s plan was good. Bhallas and Iyers got happy seeing the Raman and Ishita together. Ishita got hurt and refused to complete the puja. She wanted Yug and Aaliya to perform the puja. Arijit wanted the spoil the event to make Raman helpless. Raman and Ishita faced a new challenge when Sudha returned. Sudha refused to accept Raman with a new face. She didn’t believe Bhallas. She refused to allow Ruhi and Karan’s marriage. She pledged to expose Raman as a fraud. She wanted a proof for Raman’s identity. The written update of 27 August 2019 Yeh Hai Mohabbatein episode full story ends here. 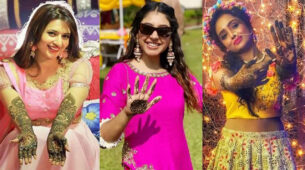