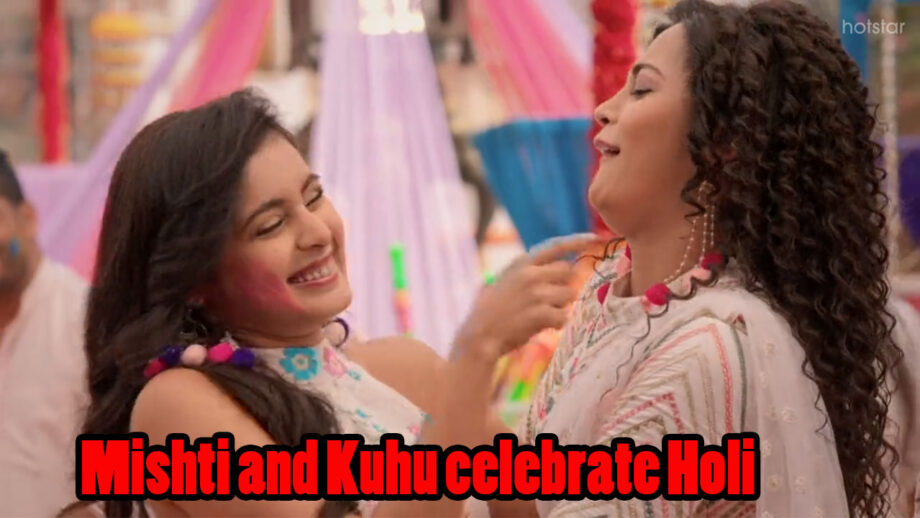 The episode begins with Kuhu denying to go down but Rajshri explains that festivals have to be celebrated together. When she mentions Mishti they tell her not to fight with her. Rajshri and Varsha leave saying they can’t force her, but she should realize she is wrong. Ketki gives laughing powder to Kunal to make Mishti and Kuhu laugh but it gets exchanged with a packet of bhaang when Kunal collides with Meenakshi. Meenakshi wants the sisters to fight under the influence of bhaang. Kunal asks Mishti about golgappa competition and she agrees and Abir convinces Kuhu to participate in the competition. Kunal announces the competition and asks who will compete with Mishti, Kuhu says she will. Abir and Jugnu mix the powder in water. The competition begins. Kuhu and Mishti compete and Jasmeet and Nidhi also participate.

Rajshri apologizes to Meenakshi about Mishti and Kuhu’s fight but Meenakshi says she is also their mother and wants to see them happy. After the competition ends, Jasmeet wins and Kuhu and Mishti have a tie. Jasmeet and Nidhi laugh and argue. Mishti and Kuhu also stumble. Abir and Kunal get worried. Abir says they seem drunk and Kunal agrees. He checks the powder and says it’s bhaang thandai. Kunal gets confused and Ketki says its laughing powder packet. Abir says its thandai. Abir says Mishti and Kuhu can fight. Mishti and Kuhu argue after Ketan falls in colour. They hug each other and Mishti says no one will scold Kuhu. Everyone dances. Abir runs to apply colour to Mishti but she escapes. Abir lifts her and applies colour and they have a moment. After they come back, Kuhu says Mishti is the best dancer. Mishti says no, Kuhu is the best. Kuhu says I will ask Nidhi. She thanks Vishwamber for giving her world’s best sister. Mishti thanks Varsha. They go in. Kuhu and Mishti ask Jasmeet and Nidhi not to stay angry.

Abir and Kunal look on. Kuhu says I snatched Mishti’s mandap. Mishti says sisters are such and love each other a lot, I m a big fan of your dressing sense, just you can do that. Rajshri asks Abir if he explained them. Abir says no, thandai has explained them, they are drunk, they have much love in their heart. Varsha asks Kuhu and Mishti to have water. Nidhi says Jasmeet is a coward, go and colour Meenakshi. Abir asks why not. Kuhu says she can’t do it. Mishti asks can you do that. Kuhu says of course. She takes colours and applies to Meenakshi. She says happy holi. Everybody gets shocked.

Kunal asks Kuhu to behave. Nanu says no one played such holi before. Meenakshi says I‘m glad, happy holi Kuhu. Mishti says Kuhu made me lose again. Kuhu says you also apply colour. Varsha asks her to stop it. Mishti says I will also play. Meenakshi asks what happened to you both. Rajshri asks Mishti to apologize. Mishti says sorry Big ben. Everyone worries. Kuhu says not Big ben, her name is Dragon Saas. They laugh. Everyone looks on.