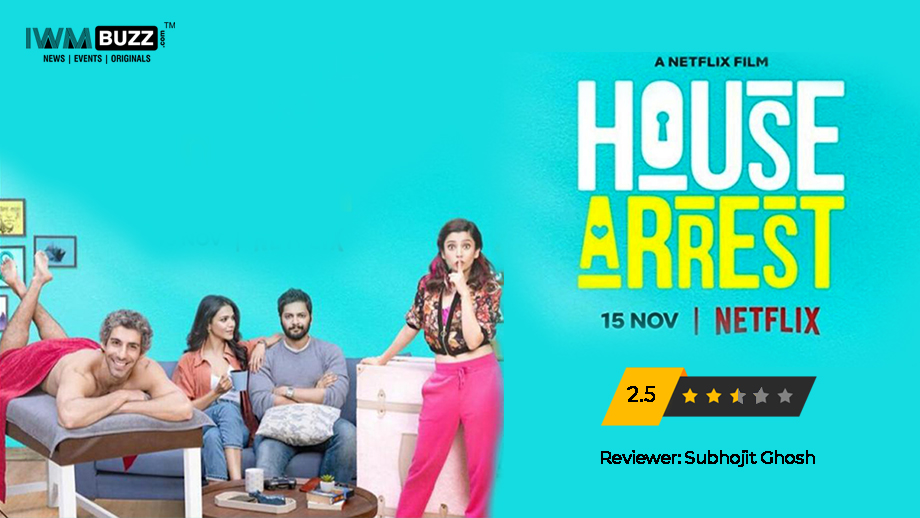 In today’s fast-moving world where work pressure and personal dissatisfaction often gets the better of mental peace and mental health, isolation is the ‘call of the hour’. But the bigger question is that ‘How long of isolation is normal isolation and since when does it transform into something creepy?’ Well, that’s debatable. But 99% of content viewers will agree to the fact that staying indoors and meshing yourself in your house for 9 long months is almost next to insane. Is it the same with Netflix’s latest, House Arrest featuring Ali Fazal, Shriya Pilgaonkar, Jim Sarbh & Barkha Singh? Let’s read to find out.

Karan (Ali Fazal) is a richie-rich guy hailing from New Delhi who hasn’t LITERALLY stepped out of his house for 9 whole months, would you believe it? His friend JD (Jim Sarbh) is a serious womanizer, lothario skirt-chaser who’s only life goal seems to take women to his bed. However, he happens to be a concerned friend to Karan (or atleast shows that he is) and hence he tries various ways to get Karan out of his abode of heaven but he fails miserably in all of them. Karan happens to be that one guy who’s in love with the bliss of solitude and hence is pretty happy about not having invited any guests for the longest of time at his house. But then hey hey, do some guests really need invitations to barge into your house? One such guest is Karan’s neighbour Pinky who happens to be the daughter of a Dubai-based Don. One fine day, Pinky storms into Karan’s house along with her 7” tall bodyguard Rambo and asks him to keep a ‘parcel’ in his house till the time she returns home. Although, initially normal, Karan is absolutely hesitant about it when he realizes that the ‘parcel’ is no ordinary parcel but it is actually a man latched up in a suitcase who apparently belongs to a rival gang.
A simple and straightforward Karan is dead against keeping a half-dead person in his house but hey? When the other person you are dealing with is a 7” well-built tower in almost the true sense of the term, does any denial actually work? A colossal NO. Meanwhile, Karan gets a call from JD that he’s sent his friend’s friend, Saira to meet him at his place. Saira happens to be a journalist who’s currently doing her research on the subject of ‘Hikikomori’ which is a Japanese concept where reclusive adolescents or adults withdraw themselves from the society and seek extreme happiness in extreme degrees of isolation and confinement. Soon follows a call from Saira’s end that she’s into researching on ‘Hikikomori’ for her work and she finds Karan as a very interesting prospect who can assist her research with an interview. Despite several attempts to downplay it, eventually, Karan lands up with Saira at his house for the interview. Initially, it starts with work, the duo start to enjoy each other’s company and eventually hit the bed realizing their inner mutual attraction from within. All this happens when Karan is simultaneously hiding someone else’s half-dead body possession from Saira to ensure that she doesn’t misunderstand her to be some isolated ‘psycho killer’. But what’s a film without a good spoiler to make things funnier in the climax right? The same happens with this as well when the other literally runs past them all of a sudden during their private and cosy moment thereby literally shaking Saira. Karan and Saira confront each other and Karan tries to explain that he’s got absolutely nothing to do with it and it actually is the action of his gangster neighbour Pinky who literally threatened him for life due to which out of compulsion, he kept him in the house. But nothing seems to work with Saira and he feels that just like JD (his ex in reality) has been a jerk in his life, his friend Karan is no different. Eventually though, as the narrative calls for it in the climax, the misunderstanding clears when Saira leaves the house all disgruntled and disappointed and Karan breaks his 9-month long stint and eventually steps out of his house for the cause of his ‘love’.

IWMBuzz Verdict: From the very first sequence, House Arrest manages to keep you gripped and makes you stay glued to the screen giving you an intriguing feel as to what is going to happen next. There’s a certain sense of mystery and conundrum that seems to prevail from the beginning giving you an eerie feel as to why would a man not step out of his house for 9 long months. As the story unfolds further, it makes you want for more. However, one must say that as the narrative transforms into the climax zone, it starts to get boring and effectively loses its charm. The direction gets the best out of Ali Fazal and Shriya Pilgaonkar for the longest of time but a rather weak plotline in the second half plays spoilsport. There’s not too much of scope for innovative cinematography as almost 90% of the entire shoot has happened inside that one big lavish house but full marks and kudos to the art direction team for getting the aesthetics absolutely on point. From getting the right decorative pieces at the right places to ensuring apt color combination of the background and foreground, they have paid attention to every minute detail with finest of concern. The performances of Ali Fazal and Shriya Pilgaonkar will impress you for sure but as mentioned earlier, a weak second half makes you lose attention and grip over the story. House Arrest proves to be a perfect example of what holds your attention doesn’t necessarily retain it till the end. Jim Sarbh impresses as usual in his weird, quirky avatar and is stellar. But it’s the chemistry between Ali and Shriya that holds a lot of firepower. Overall, to sum things up, watch it to witness something different as definitely the genre of ‘house isolation’ hasn’t been explored much in Indian content. But eventually, when you watch it, you might just question your common sense and wit as to how could ‘that’ be a prospective reason to stay indoors for 9 months. Keeping the ‘suspense’ alive.