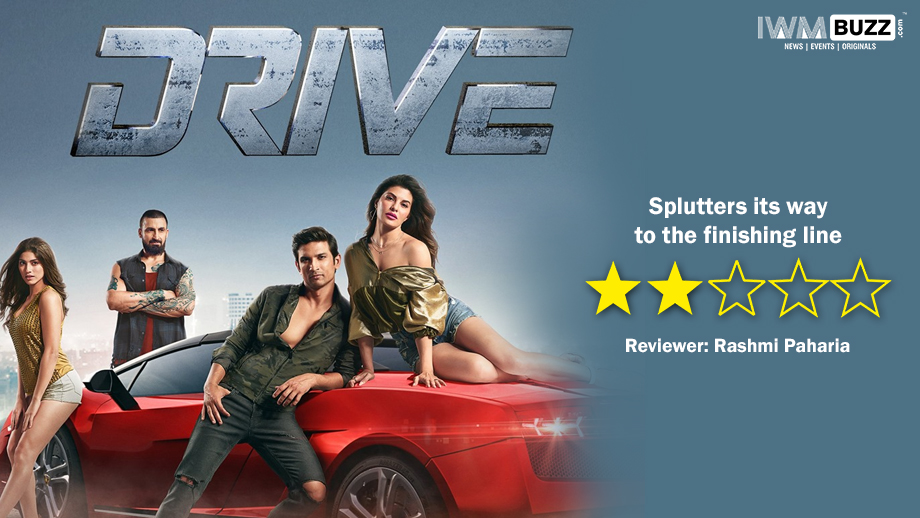 When the trailer of Netflix original movie Drive had dropped on the streaming platform, it had made everyone sit up and take notice with its apparent sleek glitziness and spectacular imagery. Then a couple of songs from the flick were released on YouTube, perfectly timed to pique viewers’ imagination and keep them drooling in anticipation. Jacqueline Fernandez sparkled and sizzled in the peppy numbers and Sushant Singh Rajput, fresh from the success of Chhichhore, looked like a dream.

It was quite apparent from the promos that Drive was one of those racing-cum-heist movies that have become so popular the world over. And we Indians definitely love our share of a good heist and action flick. We’ve even made just-a-shade-better-than-mediocre movies such as the Dhoom and Race franchises super hits.

So it was obvious that Netizens were absolutely enamoured with the promos, labelling it the desi version of the Fast and Furious franchise, and what not. It was also the first full-fledged movie from the stables of Karan Johar’s Dharma Productions, to have an exclusive digital release, and on a platform as revered as Netflix, no less.

But alas! As little as ten minutes into the movie, they found their hopes being smashed to smithereens. For Drive is hardly the dazzling spectacle of cinema they had expected it to be. It is, instead, a haphazardly put together, poorly-conceived let down of a movie – the brand ambassador of sorry cinema, in plain speak. Allow us to elaborate.

Drive is an ambitious movie, as all Dharma Productions movies start out to be. It also has a lot of show-sha, again, much as all Dharma Productions releases. Soon, however, you begin to realise that the show-sha is just a ruse to blindside you and take you unawares–with the hopes that maybe, just maybe, you will ignore the plot and screenplay, or the lack thereof; the shoddy computer graphics, and the sloppy special effects.

As for being ambitious, the movie is too ambitious for its own good – it conceives a heist at, of all places, the Rashtrapati Bhavan! Imagine the gall of it! And the plotters of the heist even succeed in penetrating the security of the seemingly impenetrable abode of the Head of the Indian state, that is the President of India, and with laughable ease too.

Though the movie starts off well with a decent race at the very beginning, it pretty soon descends into chaotic wannabe-ness, after which it never gets a chance to redeem itself. Coz Drive is afflicted by a severe case of the wannabe-syndrome. It wants to be the Indian version of the Fast And Furious franchise, the Ocean’s franchise, The Baby Driver and every other fast cars and fast money movies that are out there. But it falls flat on its face, and pitifully so.

Tara (Jacqueline Fernandez) is the leader of a gang of racing enthusiasts that moonlights as a sophisticated band of thieves, carrying out complex heists at the most hard-to-reach places in the country. Naina (Sapna Pabbi) and Bikky (Vikramjeet Virk) are the other members of the gang.

An outsider called Samar (Sushant Singh Rajput) infiltrates their gang by ingratiating himself into Tara’s favour by virtue of his terrific racing skills. Samar dons the garb of a legendary thief called King, and carries out dare-devil heists all across the country, and in the unlikeliest of places.

In the meanwhile, Vibha Singh (Vibha Chhiber) is a hi-powered and corrupt bureaucrat in Delhi, who has been squirreling away millions of ill-gotten rupees in a secret vault at the Rashtrapati Bhavan, with the help of her equally corrupt aide, Hamid (Pankaj Tripathi). Tara and gang get together with Samar to loot that stash, 890 crores, to be precise.

A government of India agent called Irfan (Boman Irani) wades into the picture, purportedly to safeguard Rashtrapati Bhavan from the evil intentions of King. Apparently, the guy leaves a card at his current heist job, which proclaims where he will strike next (duh, seriously? How inventive!).

What follows is a plot so convoluted, interspersed with such poor graphics and SFX, that we wonder whether it is a Dharma Productions flick we are watching. Karan Johar movies have always been high on visual imagery and dazzling special effects, if nothing else. The movie, in its latter half, loses the plot altogether and degenerates into a mediocre mess faster than Flash himself. The plot twists and turns appear to have been added just for shock value, but sadly, they hardly shock, let alone stir us.

And to think that this mess of a movie is the work of Tarun Mansukhani, the man who gave Bollywood the opus called Dostana. In fact, we’d been waiting for eleven long years for Mansukhani to come up with his next, and wham, his next shatters ours expectations like the proverbial sledgehammer. Drive is a travesty we could definitely do without.

By the end, we are so tired of the contrived twists and forced plotlines that we just want the movie to end. End it does, spluttering and coughing its way to the finishing line, much to our painful relief.

In the meanwhile, 2/5 is our rating for Drive.

Jacqueline Fernandez and her stunning looks in yoga pants

Jacqueline Fernandez Looks Like A Bright Sunshine In Off-Shoulder Yell...

Dostana 2 Big Update: Kartik Aaryan to be replaced due to professional...