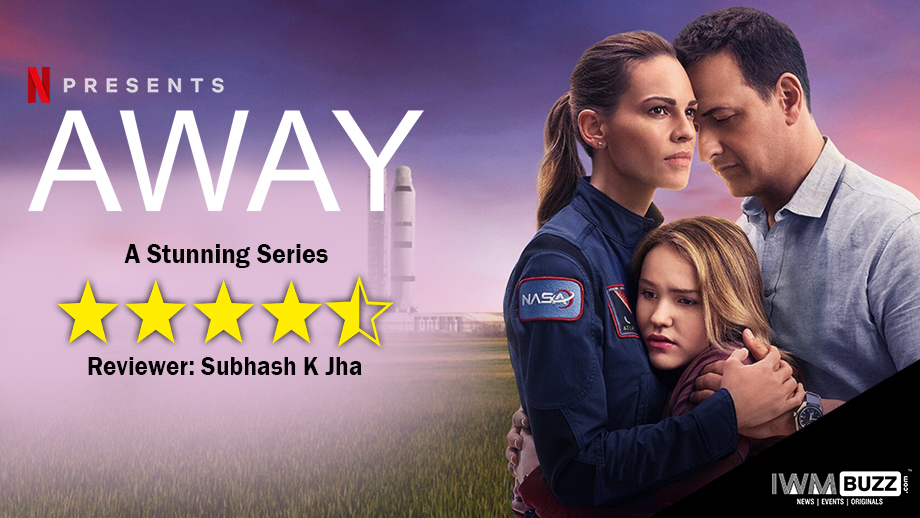 Directed by Edward Zwick and others

Apart from a rather unfortunate utterly stilted India portion, every scene character and feeling in Away rings true. The story of a woman who mans(yes yes , we see the delicious ironic contradiction there) a spaceship to Mars, is a work of wondrous art with thunderous writing skills manning and maneuvering the 10 episodes through a heartwarming odyssey to the heart of the matter.

The one thing that I straightaway loved about Away was the time it devoted to the family of the astronauts. This is unlike other notable space dramas including Gravity where the director just wants to show off his knowledge of outer space. Away uses space to communicate the agony of being millions of miles away from your loved one. It also reminds us that water resources are drying up rapidly. And don’t waste tears over that. You may soon have to drink only your tears.

Someone very wise—the Russian astronaut Misha, if you must know– rightly says towards the end, “Motherland is a myth, borders are imaginary. The only thing that matters is your loved ones.”

This stunning series doesn’t waste time on homilies and bumper-sticker wisdom. Nor is it a wall-to-wall Spacewalking binge. It tells the story that it has to,with oodles of feel. In no time at all, I was in the spaceship with Emma Green(Hillary Swank) and her self-consciously diverse crew. I wonder why did the crew had to be so pointedly culture-prolific: a Russian veteran astronaut Misha(Mark Ivanir), a callow young Black recruit(Ato Essandoh), a Chinese astronaut Lun Wang(Vivian Wu, outstanding) with a deep secret.

And of course the Indian, our Indian, second-in-command pilot Ram Arya(Ray Panthaki) whose backstory didn’t work for me, not with that fake Hindi accent.And who has a name like Ram Arya in any way? Having said that , I must applaud Ray Panthaki for bagging such a meaty role in series that celebrates Hillary Swank’s talent.

On the ground level we are constantly clued into the lives of Emma Green’s husband Matt Logan(Josh Charles) and her troubled teenaged daughter Alexis(Talitha Bateman). Josh Charles is unassumingly cogent as the supportive husband who could’ve been up there in space in his wife’s place if it were not for a congenital illness.

Josh plays the role with pitiless detachment and unspoken empathy. The husband-wife scenes are the best moments in the unhurried elegant engaging narrative. By the time the spaceship approached its destination, I only wanted Emma home. Safe and close to a family that makes sacrifices for a better civilization.

But do we deserve a better place to live in? Away makes us question our casual attitude to family, country, environment and civilization. Even if these issues do not concern you Away pulls you into a damn interesting story of a woman/wife/mother who chooses to fly into space because….well, it’s there. This is Hillary Swank’s show all the way. And she never lets us forget it.