Knowing about Ali Fazal, the first thing that we remember him is for his minor role in Rajkumar Hirani’s blockbuster 3 idiots in 2009, where he played a good-natured guitar-loving student who hangs himself due to the academic pressure. Ali Fazal is a 33-year-old Indian actor and model, who landed in a Hollywood production in a role opposite Judi Dench in the movie Victoria and Abdul. Who wouldn’t love to know the success story of this outstanding actor?

Ali Fazal, in his school days, played basketball and dreamt of representing India in the sport. He had the most confusing filmography career. His first feature film was Shahid Mirza which never released, and later, he had a random part in the movie The Other End Of The Line, which he did in his college days at St Xaviers, Mumbai.

In an interview in 2017, Ali explained “I got to know about Furious 7 from someone. I was in Mussoorie at the time and it wasn’t even an Indian part. But I recorded a clip for the scene, with my friend posing as Vin Diesel’s character, and sent it to them. I did a tiny Indo-US indie which is playing there right now, called For Here Or To Go? I play an immigrant techie working in Silicon Valley. But there was no strategy in doing international films—I was keeping an open mind.”

“Victoria Belfrage, who runs one of the top British agencies, saw parts of the shoot of Victoria & Abdul and signed me up during the filming. They are a boutique agency and handle a few actors like Daniel Day-Lewis, Jude Law, Rebecca Hall. I asked, why do they want me? My producer told me to just jump in. Now I have an American manager and a publicist in L.A. An ecosystem has come out of nowhere.”

Now, Ali is seeing a rise and rise with his amazing character roles and is one of the best actors of Indian origin in Hollywood, as well as in Bollywood. 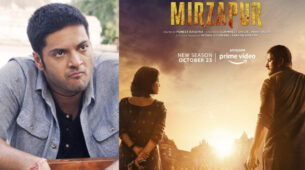