The times when Lady Gaga crossed the fashion line and was tagged as 'vulgar.'

Lady Gaga has been making the headlines for being a fashion icon. She has an amusing taste of fashion and is known mostly for scandalous outfits. She is the couture queen and not scared to try something crazy whenever possible, making a point. From meat dress to pyrotechnics bra, she has some of the most unforgettable fashion statements.

Lady Gaga many times has crossed the line and has been slammed for being vulgar. And looking at these outfits, we cannot agree more why if you are wearing something to make a point or just for fun, that doesn’t make it look any more gross and detestable. Here are some of the most outlandish outfits ever donned by Lady Gaga that will leave you shocked.

For her performance, the hit song Paparazzi tried to make a point but was covered in red (to denote blood). Though she gave her message clear, that didn’t make the outfit seem any less gross.

When Gaga was attending a Yankees game in 2010, she chose to ditch the pants and wore a baggy open jersey showing off her bra. Besides her behavior, her outfit also managed to grab some attention.

Who would ever forget the iconic red carpet moment when Gaga chose to wear a meat dress? Yes, you heard it right! She wore an outrageous yet praiseworthy dress made of meat. It is still on display at the Rock and Roll Hall of Fame.

This outfit certainly is one of the most scandalous ones worn by Gaga. Performing her song Judas, she wore a somewhat dress like a nun. Looking at the establishment, you will know why it indeed gained an extensive disapproved look from the masses. 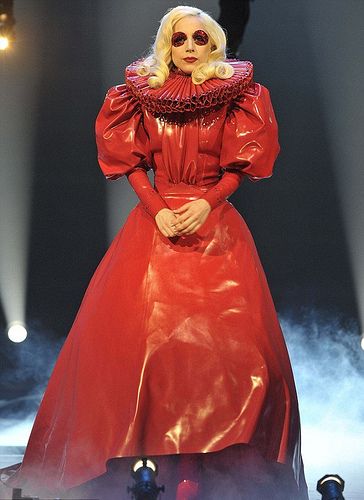 Lady Gaga in bright vs pastel outfits: Which looks of her has your heart?

10 Hollywood Divas Who Own The Most Expensive Jewellery, Find Out

Here's Some Of The Oops Moment Of Megan Fox, Lady Gaga To Salma Hayek

Lady Gaga Vs Rihanna Vs Katy Perry: Who Worn The Most Unique Outfit? S...

What Did BTS Do After They Lost Grammy To Lady Gaga & Ariana Grande?

Ariana Grande Vs Taylor Swift Vs Lady Gaga: Which music icon has the m...

Grammy 2021: This Is How Army Reacted After Lady Gaga & Ariana Grande...

SC Media and Technologies is creating a social media presence for bran...

Top 5 Celebs Who Stunned You With Their Velvet Outfits: Sexy Divas Fro...

What's the Secret Connection Between Lady Gaga and Blackpink?