Know the real reason behind SRK getting the name King Khan When we talk about male superstars in Bollywood today, you may like him or you may not, but you cannot deny the fact that his image is the first that flashes in your mind when you hear the word ‘superstar’. Well, no brownie points for guessing, we are talking here about the Badshah of Bollywood, Shah Rukh Khan.

Shah Rukh Khan is one individual who has received a limitless amount of unconditional love from the fans in a career spanning more than 25 years and over the years, he has been bestowed with many interesting nicknames, one being ‘King Khan’. So why is SRK called King Khan?

Well, it all happened in the 2000 decade when almost everything that Shah Rukh Khan was doing became a superhit unlike his contemporaries then, Aamir Khan and Salman Khan. All the three Khan’s started growing together at the same time and the competition between them was quite a healthy one. It was because SRK dominated the box office success ahead of them for many years, fans gave him the nickname of ‘King Khan’ and the rest is history.

Quite amazing ain’t it? For more updates, stay tuned to IWMBuzz.com 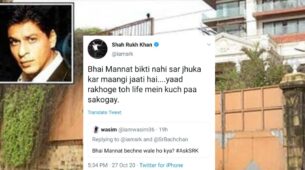