This month, as director Dharmesh Darshan’s Raja Hindustani turns 23 years old, it would be apt to recall its primary claim to fame: Aamir Khan’s kiss with his co-star Karisma Kapoor which qualifies as the longest liplock in Hindi cinema’s hoary history of physical intimacy.

There are many myths regarding this marathon kiss in Darshan’s blockbuster. Firstly, it was widely believed that Karisma Kapoor didn’t want to do the liplock. But Aamir was all for it. Because the film demanded it, of course. What did you think? That Aamir likes to kiss his heroines? Nah! It is just the call of duty. It is a sheer chance that role after role has ‘demanded’ a kiss from Aamir with his co-star in Qayamat Se Qayamat Tak, Jo Jeeta Wohi Sikandar, Dil Hai Ki Manta Nahin, Dil, etc, etc.The list is long and endless.

The list of Aamir’s journey to smoochistan is impressive. But the one in Raja Hindustani stands out for its length. Just like Aamir’s interviews, it goes on and on. Either the director was mesmerized by its intensity or he fell asleep. Apparently Karisma was taken aback when director Dharmesh Darshan did not call out ‘cut’ to the kiss after a decorous length of time.

We don’t know if it was because Karisma really enjoyed the kiss. But she never got lip-intimate with any of her other co-stars in any other film.

Incidentally, Aamir’s colleagues Salman and Shah Rukh do not kiss on screen as a policy, although SRK did make an exception in Yash Chopra’s Jab Tak Hai Jaan. 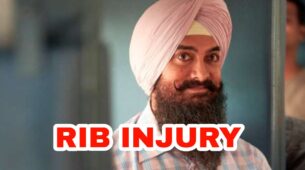