There is a reason why that elusive feeling called love was created. So that movies can be made about people falling, or rising, in love. That’s why.

Almost Love has a woozy, slightly tipsy endearing feel to it. The heart is constantly in the right place as we are taken into the love lives of a bunch of New Yorkers whose togetherness is threatened by ennui. What else can it be? Why is Adam and Marklin’s 5-year relationship suddenly being questioned?

Marklin is an influencer who takes pictures of his food before eating. He is somewhere lost in his own posturing. Adam paints pictures that are sold with someone else’s signature at the bottom right-hand side of the canvas. They are both not quite the right fit in their social space. But do they want or need a change in their relationship status?

This gay relationship serves up some illuminating glimpses into how two people remain relevant to one another without bending backward to please all the time.

This is a landscape brimming with provocative situations. The size-XX Michelle Buteau plays a woman in a stagnant relationship with a homeless and titanically tactless chap Henry (Colin Donwell) who, to be frank, deserves to be on the streets. After oral sex with his gf he comments adversely on the taste in his mouth. She naturally tells the homeless jerk to get lost.

There is a potential independent film here that remains stranded in a sort of mid-stride crisis in the narrative.

I loved the way the debutant director celebrates love without inhibitions and curbs. These are a bunch of carefree people following their hearts. Kate Walsh is delightfully bubble-bound as a woman who thinks she’s in a blissful marriage. Her conversations with Adam over his appropriated paintings are lip-smackingly droll.

During these times of severe crisis their buoyancy may seem somewhat misplaced. But the New Yorkers who inhabit writer-director Mike Doyle’s first film never fail to evoke a feeling of warmth and tenderness even in their most self-serving moments.

My most favourite moment in this mildly memorable rom-com involves a 40-something teacher Haley(Zoe Chao) whose almost-18 student shows up at her door with a cake pretending it is his 18th birthday, and threatens to kill himself by putting his head in her oven when she refuses to make out with him.

Love plus quirk is always a winning combination. And to watch two gay men look so effortlessly compatible together made this winsome comedy a cheerful experience during these times of dark thoughts. 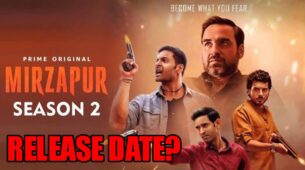 Mirzapur 2: Is the release date out?