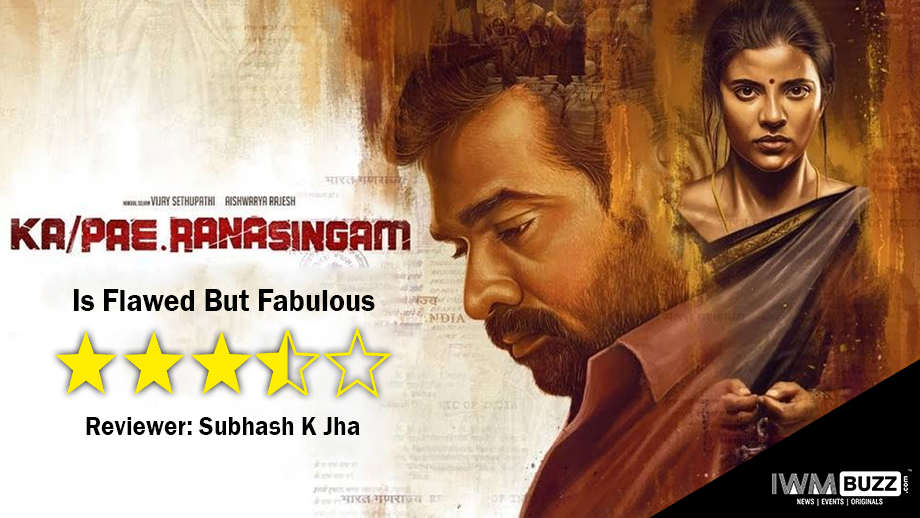 By the time the primeval screams of helpless agony of woman scorned filled the screen at the end, I was so shaken by the film’s stirring depiction of bureaucratic empathy that I wanted to flee the scene.

Ka Pae Ranasingham offers no quick exits or easy solutions. It traps you, pins you down to the protagonist Ariyanachi’s hopeless battle with bureaucratic red-tapism to get her dead husband Ranasingham’s body back from Dubai where he has died under mysterious circumstances.

It’s not the mystery that freezes us in our seats. It’s the sheer frustration rage and helplessness of watching a brave woman brutally powerless in her bereavement and grief.

Here, I must digress a bit—as this film often does—to wonder how closely the writer-director P Virumaandi is influenced by Mahesh Bhatt’s Saaraansh. In that brilliant expose on bureaucratic insensitivity Anupam Kher played a grieving father trying to retrieve his son’s ashes from the indifference of red-tapism.

Matters are much more complicated in Ka Pae Ranasingam, and not only on screen where the determined wife from rural Tamil Nadu goes from pillar to post in pursuit of closure to her bereavement. There is another level of unwanted complications playing out from behind the scenes.

The writer-director unnecessarily brings in an entire highly distracting flashback where we see the heroine being courted and romanced by Vijay Sethupathi. The love journey is thoroughly disruptive and probably incorporated to justify superstar Sethupathi’s presence.

The closer we come to closure to Ariyanachi’s horrific grief the more outlandish the plot gets. By the time a lookalike of PM Narendra Modi shows up at a dam’s inauguration(oh damn!) to solve Ariyanachi’s monstrous crisis,I was so invested in her distress that I was willing to forgive the superfluous flab attached to the plot.

Though the plot tends to ramble it never loses its focus . The central tragedy, so deep yet so flawed, will haunt you for a long time. The image of Aishwarya Rajesh determinedly striding across the sweaty streets of Chennai armed with her baby, is so powerful it decimates all misgivings as you become one with Ariyanachi’s struggle.

While Aishwarya steals the show(and I do mean, steels) hats off to Sethupathi for agreeing to play her dead pati. There is a snide reference to Sridevi’s death in Dubai and her body being flown back to India within days, whereas Ariyanachi’s husband’s remains are returned to her after ten months.

The sheer volume of indignity inherent in the situation should make us think hard.

At one point perched on the precipice of suicide Ariyanachi is warned of the danger.

“I think it’s more dangerous to live as a citizen of this country,” she replies quietly in this loud rabble-rousing melodrama filled with sound and fury signifying something. Something we cannot turn away from

Also Read:Blast From The Past: How Asha Bhosle Sang The Drug Anthem Dum Maro Dum Instead Of Lata Mangeshkar