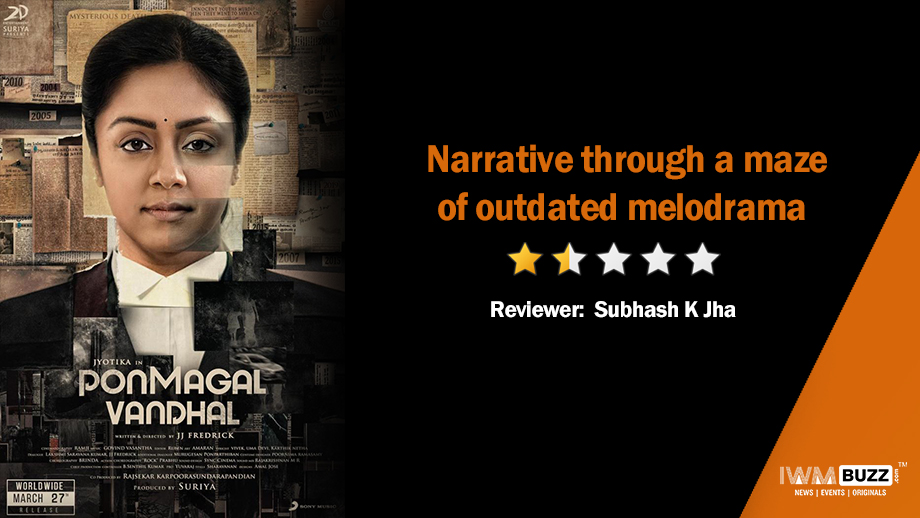 A rather disconnected thought crosses the mind while sitting through this 2-hour trip into the neighbor bleeding hearts club: are hamburgers the favourite dish of the actors in Ponmagal Vandhal? They ham so much! And that includes the habitually restrained Jyothika. She is usually so reined-in. Here she harks back to the acting style of the screen queens of Tamil cinema in the 1960s: Savithri, Jayalalitha, etc. Facial contortions suggesting the contortionist’s self-important day out don’t add up to a substantiative social message. Propaganda works only when the brains behind it are serious in their intentions.

Jyothika plays Venba, a crusading lawyer who re-opens a 20-year old case of a woman branded a serial child-killer and killed in an ‘encounter’. Venba suspects foul play. So do we. But not where she thinks. The entire film smacks of hard-selling a ‘message’ film about women’s rights and sexual molestation of children. Somewhere ‘honor killing’ is also mentioned.

These are put forward with such excruciating crudity (ravaged little girls with the front of their frocks soaked in-studio blood) that it feels like a third level of sexual plunder. The first time a rape victim experiences pain and humiliation while being attacked, the second time in the courtroom.

Now there is third level of violation that a film such as this subjects the victim to.

It’s not just the ideological bankruptcy under the bristling self-righteousness that appalls. It’s also the sheer shoddiness of presentation with the editing frequently resembling the jumpcuts on Indian soaps necessitated by commercial breaks. Towards the end during the courtroom finale when our heroine Venba is mourning the loss of justice at her mother’s graveside, a woman sitting in the courtroom while the verdict is being pronounced is shown rushing to Venba sobbing, ‘You haven’t lost, you haven’t lost.’

I am not too sure of that. Ponmagal Vandhal is a lost cause from the first to last. Its pursuit of a commercially viable language to put forward its gift-coupon version of a social drama, takes the narrative through a maze of outdated melodrama. Some of the twists in the plot are absurdly jingoistic. Tax-free it may or may not get. But this film will certainly qualify as one of worst projection of sexual violation since Adam messed around with Eve.