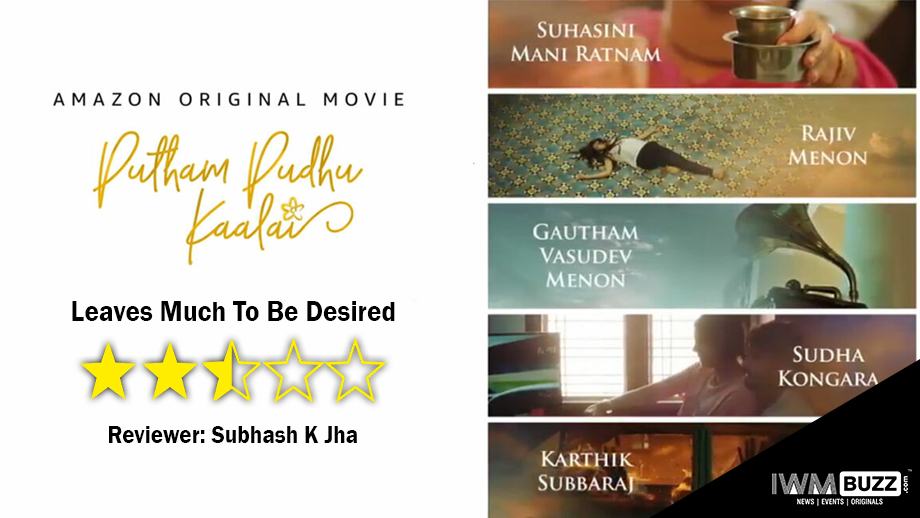 We all know this is the time when we need to be kind. And if you don’t know why then you probably live under a rock. Or in Goa. None of the characters in the five stories of this well-intended but bland omnibus lets us forget that they are living during a time of crisis and trying to make the best of it.

The omnibus’ opulent and omniscient optimism of the presentation made me feel the best thing to have happened to fractured relationships is the Coronavirus. The first story Ilamai Idho Idho directed by Sudha Kongra plays it for cuteness to the hilt and places two older people together to enjoy time away from the judgmental eyes of their children.

Very self-conscious in its sunshiny intentions, the narrative does instant-time switches. Sometimes we see the couple (played by Jayaram and Urvashi) in their 60s. Sometimes in the 20s(played by two star-kids Kalidas Jayaram and Kalyani Priyadarshan).

More than the schmaltzy over-sweetened plot it was a delight to discover the spontaneous charms of Jayaram’s son. He is a natural. Which is more than we can say about the stories that seem to be burdened with the job of spreading goodwill.

Over-sweetened is the only way to describe the next two segments Avarum Naanum – Avalum Naanum and Coffee, Anyone? In the former, an estranged granddaughter gets a chance to know how ‘cool’ her granddad is when she reluctantly comes to stay with him. Brimming with the aroma of shastriya sangeet and traditional values this segment, directed by Gautham Menon is a special disappointment as one expects so much more from Menon.Not a soppy over-sentimental ode to the creaking joints of the joint family In Coffee, Anyone? Directed by Charu Haasan, Kamal Haasan’s clan(his niece, nephew, daughter are all there ) descends to squeeze tears out of the viewer with their sugary tale of a comatose mother, her obdurate husband (who won’t put his wife into the hospital) and their three daughters who stumble through differing stages of hysteria in trying to good guilt-ridden daughters. When Shruti Haasan starts singing a traditional Tamil song on the internet I decided it was time to flee the scene and let this family stew in its own juices. Or percolate in its own coffee beans.

The fourth story Reunion directed by Rajiv Menon was the absurdest of the lot. A good-hearted young doctor and his angelic arthritic mother take in a stranded girl as a house guest when the lockdown suddenly happens. The girl, brimming with nervous energy, repays their kindness by snorting cocaine in their bathroom. When she locks herself in, the doc bursts into an old Tamil song which calms her nerves. What about the viewers’ abused nerves? Just when I thought it was time for the abused hospitality to end, the hosts decide to do a crash-rehabilitation programme on the girl. If they needed lockdown entertainment they could have just subscribed to Amazon!

All I can say about the flow of unstopped benevolence is,my Goodness!

The final story Miracle directed by Karthik Subbaraj has more bite than the darkish yelps of the four other stories. Two petty criminals, one suicidal filmmaker and a miracle(pronounced ‘meer-yaquel’) man on television come together in an unexpected clasp of irony. This, I thought, was the story that I wanted to see more of. Not the other over-sweetened melodramas oozing with the condensed milk of human kindness.Leaves you queasy.