Samaira Kapoor to act in films Nepotism be damned. The legendary Prithviraj Kapoor and his son Raj Kapoor would be happy to know that the fifth generation of the Kapoor khandaan is all set to become part of the Indian film industry.

According to sources very close to the Kapoors, Karisma Kapoor’s daughter Samaira is being ready for a career as an actor.

Says the source, “Samaira has shown a growing interest in joining her mother and her grandparents’ profession. She will finish her formal education and proceed for training in acting to a reputed acting school before being launched in Bollywood.”

We are sure family friend Karan Johar , brother to both Karisma and her sister Kareena, would be happy to oblige.

No other film family in India can claim to have contributed five generations of actors to cinema. 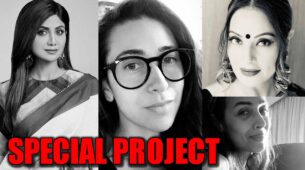 Then And Now: From chubby sisters Kareena and Karisma Kapoor to HOT actresses Karisma Kapoor's Saree Look: Be the best-dressed bridesmaid at your friend's wedding ceremony Aishwarya Rai Bachchan Vs Malaika Arora Vs Karisma Kapoor: Who is The Most FITTEST Bollywood Actress?