Arijit Singh is at scaling heights of his success. His voice has become the most needed vocal of the music industry. He sings with vigour and passion, and that makes his tracks more lovable and people’s picks.

Let’s have a blast from the past and dig in some of the best moments that are Arijit Singh’s favourite from Fame Gurukul. We all know that before having his victory fueled case unrolled, he was a contestant and had some of the most amazing times on the set.

Today the man Arijit Singh has become and all the fame he has earned is a credit to his past self. We all know that failure is always the first stepping stone towards success; he had his share of the same. Though he couldn’t win the show back then, today he has won the hearts of millions of fans.

Though Arijit Singh was eliminated from the show, there have been some wonderful times while he was at it. He did give some fantastic performances that caught the eye of many. Below are five best of those embedded times, where Arijit Singh is seen rocking the stage.

Don’t Miss: List of all Greatest Songs of Arijit Singh 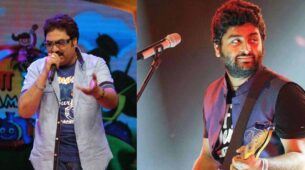