Check out the best match-winner for India! Is it Yuvraj Singh or Suresh Raina? There are many great Indian cricketers that the Indian national team has got till the date. There are many great batsmen, bowlers, fielders, captains, and even wicketkeepers. But sometimes, there are some great all-rounders too who have mastered all the things required to play the sport. Some of them have created histories with their performances and incredible records. Yuvraj Singh and Suresh Raina are the two Indian cricketers who have played a vital role as a member of the team. Both of them have played an integral part. Although Yuvraj Singh and Suresh Raina are no longer seen on the field anymore, both of them have helped their squad in winning several matches.

Yuvraj Singh, the former international all-rounder Indian cricketer was a great destructive batsman. He was a left-handed batsman being both a great bowler and a fielder. Yuvraj was well known for his records, especially the Stuart Board one. He has made the team win with his powerful knocks and consistency on the field several times.

On the other hand, Suresh Raina, another Indian professional cricketer has been no less than Yuvraj Singh. The all-rounder has mastered all the three skills- batting, bowling, and fielding. In fact, he is regarded as one of the best fielders in the Indian squad. Suresh is a left-handed middle-order batsman and an off-spin bowler. Even though he was an occasional bowler, his acrobatic catches and amazing knocks have pushed the team towards the victory gate many times.

Who do you think is the best match-winner for India? Yuvraj Singh or Suresh Raina? Comment down below! Yuvraj Singh VS MS Dhoni: Who Is The Best Match Winner For India? 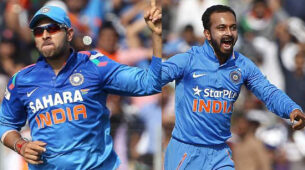 Yuvraj Singh And His Best Knocks