Vijayendra Kumeria who put up an old man look for an important sequence in Sufiyana Pyaar Mera talks about the experimentation. Vijayendra Kumeria as an actor never shies away from trying out something new.

Recently, a sequence in his Star Bharat show Sufiyana Pyaar Mera required him to don the disguise of an old man, and sneak into the police station to wipe out an important proof.

Though the process of getting into the old man look was tedious, Vijayendra enjoyed the whole experience.

Says Vijayendra, “I did not have any inhibitions in donning an old man look. It was fun doing that. And it was only for a scene. Also getting into a new look breaks the monotony. Yes, after a time, it gets irritable to have the beard and wig. But all this is part and parcel for an actor. Since I have a stubble and mustache, we covered that with the fake beard. It was tough putting it on and getting it off (smiles). Hence I did not spoil the get up for six to seven hours, till we finished shooting the sequence. I kept myself away from eating anything as I did not want to mess up my look.”

“I am glad that the scene came out well. A lot of people on the set in fact could not recognize me in the look. That was the best part of putting on the look. All credit goes to the make up man who toiled hard to give me the perfect old man look. My fans have also messaged me on instagram and twitter saying they liked me in the getup,” Vijayendra adds.

Vijayendra Kumeria is enjoying being part of the show produced by LSD Films. “I like the layering that has been given to my character. He has his own principles and is grey too. I have got a good feedback so far. So all is good.” 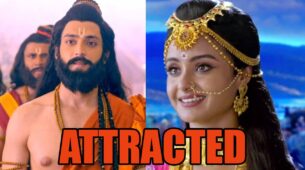