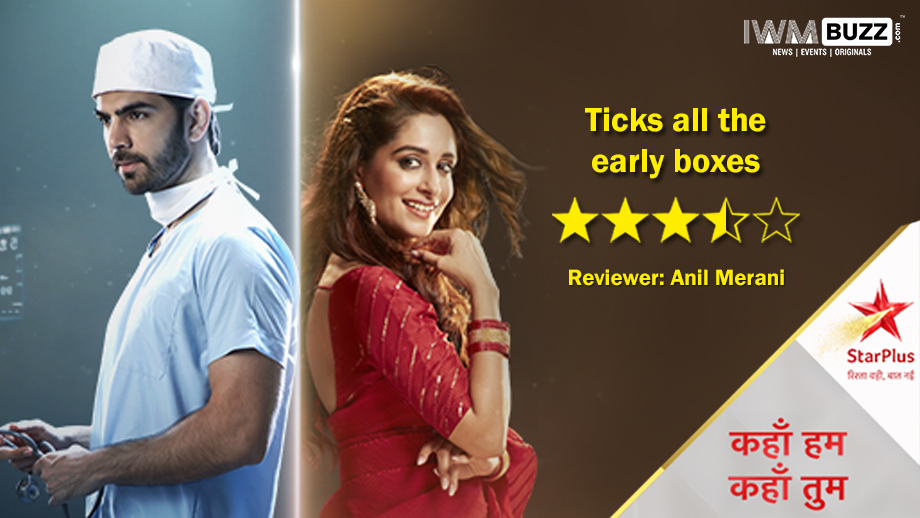 The basic theme is a doctor-actor romance. On one side you have uber-rich, successful, South Mumbai Sindhi surgeon, Dr Rohit Sippy (Karan V Grover),for whom life ends at Bandra (tony Mumbai suburb). Then you have the very popular TV actress, Sonakshi Rastogi (Dipika Kakkar Ibrahim), with her heart in the right place (does not charge for public service endorsements).

On the other hand, you have Sonakshi’s mom, Suman (Anahita Jahanbakhsh), representing the worst of TV types. She is very rude, arrogant and demands a bomb for every appearance.

The twain meets when the Sippy family hospital requires a chief guest to inaugurate their new wing. Rather than calling B-town friends who will take away media glare from the medical talk, they zero in on TV actor Sonakshi, whose show has been a chart buster for 3 years on the trot. None in the Sippy clan even knows who on earth she is. This is the biggest grudge TV stars have – of not being universally known, unlike film stars. But yes, they do have a phenomenal fan following among the concerned TGs (auto-wallah wants a selfie with her).

Rohan bumps into Sonakshi when he goes to her distant Mira Road set (travelling takes 2 hours one way) when she becomes unconscious due to overwork (another very common trait in the TV world). He prescribes some meds that she refuses to take, for fear of side effects to her skin. His dig about self-internet patient research is a very common doctors’ crib.

Sonakshi also regularly directly talks to the audience. Her convo about how difficult it is for TV actors to always stick to a diet compels you to think. She is dead right; it ain’t easy to become a known tube star.

On returning home, Rohan is forced to watch one episode of Sonakshi’s drama-heavy show, courtesy the crazy fan at home, which is his house help. He loses his cool at the screenplay, which shows Parvati (Sonakshi’s screen name in her TV show) enter the OT to bring back her dead husband.

A furious Rohan even complains to higher ups in the medical hierarchy, but it falls on deaf ears.

Suman then visits the Sippy hospital for her skin treatment from Rohan’s aunt, Dr Nishi (Tanaaz Irani).The latter tries to negotiate with her to lower Sonakshi’s event charges (she does not tell Sonakshi that she is charging).The appearance of the both alter egos was fun.

Dr Nishi manages to save 50k, but Suman still ends one up on her by wriggling 75k out of Rohan for accidently breaking her cell phone.

Rohan and Sonakshi, who both share a possible common haunted past, again bump into each other at a garden where the former goes to find some privacy. But a dog pushes him over the edge of the hill top railing. Sonakshi becomes his guardian angel and saves him.

The subsequent fun banter was really enjoyable, with full on digs. He first had to eat humble pie by requesting a lift, as he had not brought his car. But then gets his chance to square thing up when Sonakshi tells him that her license was not renewed.

Sonakshi is very worried with her younger sister Pranti’s (Alice Kaushik) all night partying lifestyle. But her mom brushes aside her concerns, saying all this is needed to become a film star. According to her, had Sonakshi been a film actor and not a TV star, she would have earned three times over. It is this very discrimination which forces many small screen actors to try to cross over to cinema.

Any TV show is incomplete without a TRP-worried producer. Plus here you have a co-star who tries to act fresh with Sonakshi in the guise of romantic scenes. But she plays smart and wriggles out. Her line that industry girls need to protect themselves from in-house wolves is the common refrain on most sets.

The Sippy family tree has not yet opened properly. We did see glimpses of Shalini Kapoor as the all-powerful Veena Sippy (Rohan’s mom). Abhishek Malik as Rohan’s bro will certainly bring his magic to the screen. Expect more romance between siblings of the lead characters.

While I agree that emphasis rightly is and should be on TV as it is more universally accepted, more angle of the stress of asurgeon’s life needs to be added (Rohan did say he can’t make a mistake in the OT).

Both Karan and Dipika are acting very well. It is also a change for us to see them talk and emote more naturally.

Being a Sindhi myself, I liked the Sindhi touch i.e. Sindhi and snake joke which is often thrown at us.

Over and above, it is a breezy narrative so far, with no regular TV drama devices used yet. Let’s see what TRPs say, as they alone will eventually decide the long term pace and tempo.