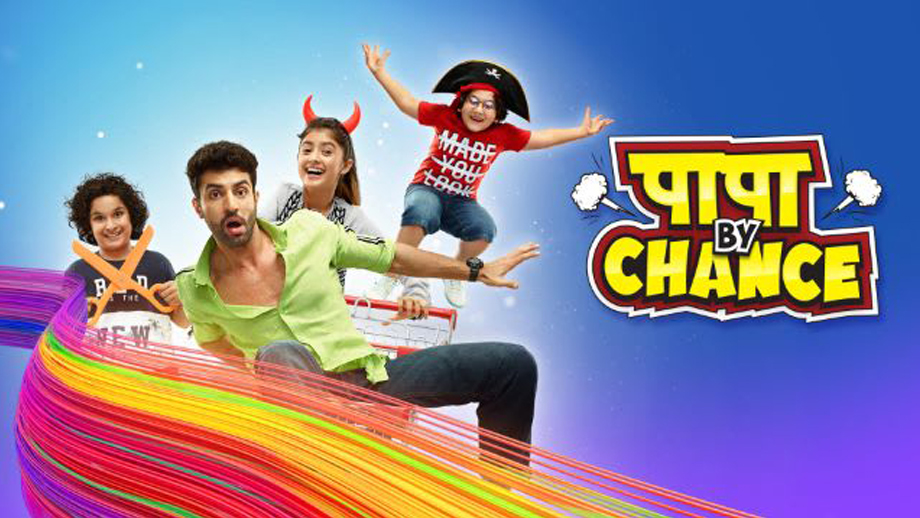 Star Bharat speaks to the Hindi-speaking heartland of North and Central India. Being very clear about their TG, they have embraced the local colloquialism of its different sub regions with élan. If Nimki of Nimki Mukhiya converses with the Bihari and eastern UP twang, Delhi and NCR based Papa by Chance (Sonali Jaffer and Aamir Jaffer) is totally Delhi-Haryana Hindi, complete with its unique jokes and accent.

If you talk Delhi, you must have a rich spoilt brat. Enter singer and scion of a 900 crore empire–Yuvaan Chopra (newcomer Zebby Singh), who hates kids. Interestingly, in the very first episode, some overzealous kid gets him detained by the cops for an unclaimed briefcase. Must say Zebby (Mr India finalist) is doing a good job. Normally, actors hailing from modelling backgrounds find the going tough.

He has just sued his mother, Sucharita Chopra (Mansi Salvi), for control over his deceased father’s huge estate and business, rightfully fearing that his new stepfather, Harman Batra (Jiten Lalwani) will usurp the money. The former had dragged her unsuccessful marriage for over 20 years for her son, and then found solace in her unscrupulous manager, after her husband passed away a year back.

Things take an interesting turn when Yuvaan accidently kills a couple after his car’s brakes are tampered with by Batra. Yuvaan’s female lawyer, Aashvi (Priya Tandon), advises him to adopt the deceased’s three kids in a bid to show to society that his father’s death had changed him for the better. The court had stayed its ruling on Yuvaan’s plea for six months, asking him to prove that he has turned over a new leaf. He was so bad that he was not even aware of how much his company was worth. The creative did not explain how Yuvaan got away from the manslaughter rap. I am no sartorial expert, yet I think Aashvi’s dress was too loud for a day in court. As expected, Yuvaan tries his charms on her as well.

Thus Yuvaan is left to fend for three kids without a roof over his head. He can’t ask his mother for moolah, for she will inform Batra, who will scuttle his plans. He turns to his multiple girlfriends, on whom he splurged huge amounts of dough; but they refuse to help him. He eventually finds refuge in a mosquito-infested pad. The scene where Aashvi gives him the insect-slaying racquet was fun.

The three kids are also a handful, bringing their respective baggages to the table. They work out a deal with Yuvaan, who is in no position to refuse. Arshifa Khan, Ishant Bhanushali, Siddharth Dubey are perfect as the kids with attitude galore.

We are waiting with bated breath to see how Yuvaan deals with forced fatherhood as the title suggests. The fun and games have already started as Yuvaan once leaves the kids home alone, wanting to hook up with a chic; sadly, for him, the judge turns up at that very time. Although we enjoy this banter, we can’t ignore the fact that this theme of man with kids has already been done to death.

So far, we have not seen much from Mansi expect crying for her son. The scene where she runs to court in heels was added for the same purpose. Mansi is a real good actor. Hope we get to see her showing real gumption. But for that, her character will need to be altered apart from the rona dhona. Another scene where she only has white sarees in her cupboard was too much; no widow these days wears only whites. Also, to be honest, Mansi looks a bit younger to be mother to such a grown up guy, but again, it is possible if you marry real early.

Veteran actor, Jiten Lalwani, is playing the classic bad man. He is as loud as he can be, beating and firing the house help for one of them saw him massaging his newly wed. Ideally, we would have preferred a more restrained performance, but guess the TG will not appreciate an understated villain. TV audiences, unlike web, like to be clearly told who is good and bad.

Indian TV is also quite double-faced, in the sense that while it accepts a male hero who has played the fool with several women before zeroing in on Miss right, the heroine, on the other hand, can fall in love only once. Here, Yuvaan will find solace in fashion designer, Amrit (Sana Saeed), whose family too was wronged by Batra. So far, bindaas Amrit has not got much to do. Zebby is among the lucky few TV actors to get a male character-dominated show.

In a bid to expose Batra, Yuvaan starts working in his company as a mere help, but is he not a well-known singer? So how come he is not discovered? Oops, sorry! Cinematic liberty……

Yes, there also might be a love triangle between Yuvaan, Amrit and Aashvi, and the latter could turn into a typical vamp, joining hands with Batra.

My two cents: Do check out Papa By Chance for a few laughs. It is not brilliant by any stretch of imagination, but good, if you want to kill half an hour of time.

The Producers Aamir Jaffer and Sonali Jaffer (Full House Media) have the knack of tackling comedy in the best way possible. The best example was the trend-setter Bahu Humari Rajni_Kant. We are eager to see the how differently they can handle this ‘bottle of old wine’ concept!!

IWMBuzz.com credits Star Bharat’s Papa By Chance with 3 out of 5 stars.