Fun and frolic on the sets of Bin Kuch Kahe 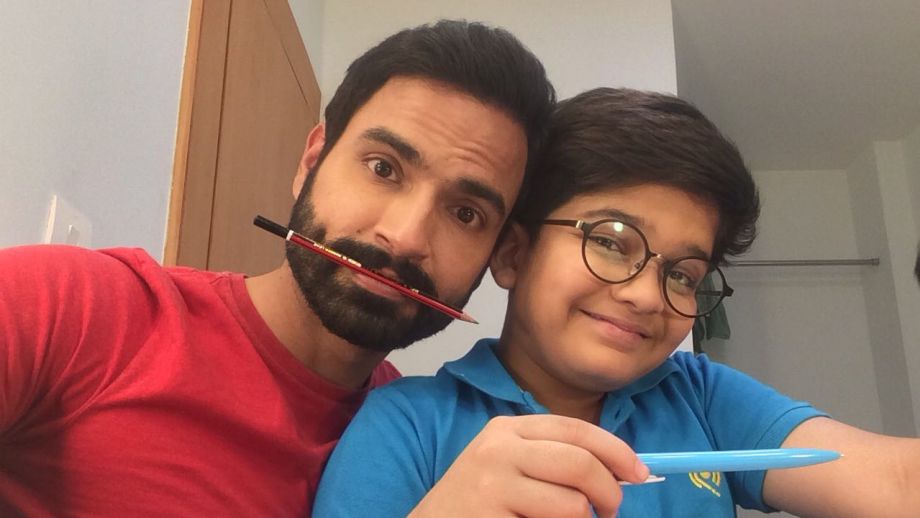 Zee TV’s young and light-hearted romantic dramedy  Bin Kuch Kahe has touched millions of hearts across the nation with the palpable chemistry between its lead actors Sameer Arora and Shamata Anchan set against the backdrop of Jaipur city. But shooting away from their homes in Mumbai, the cast and crew have had their own share of challenges to face. And this time, it was the child artiste on the show who was in a fix! With annual exams around the corner and Bin Kuch Kahe heading into some high-voltage drama, the show’s 13-year-old child actor Krish Chauhan (seen as the youngest member Aryan Kohli) was beginning to find it quite challenging to balance shoot schedules with his studies. The 7th-standard student who had managed to procure permissions to study in Jaipur and appear for his exams in Mumbai, was busy shooting for the show close to his exams. He wasn’t too sure if he’d be able to complete his syllabus. That’s when the show’s hero Sameer Arora (who plays Kabir) jumped to the rescue! Along with co-actor Archana Mittal who plays Mrs. Kohli in the show, the actor donned the hat of Krish’s teachers and helped him with his studies. The actors divided the subjects amongst themselves basis their own comfort zones and strengths and helped Krish prepare and revise for his exams.

Speaking about his bond with Krish, Sameer says, “After a hectic day at work, I find myself going back and sitting with my on-screen “buddy” Krish and help him with his studies. Since it is hard for him to study and shoot simultaneously, I make sure he studies and since we share a great bond on screen and off screen, it’s easier for me to sit him down and get him to complete a part of his syllabus no matter what time we wrap up. Also, sometimes in between shots, we try to take out some time and sit in the make-up room with his books as well. He accompanies me everywhere I go, whether it is at the gym; for a swim or Table Tennis. I help him with a few of the subjects that I’m comfortable with for his exams and Mrs Kohli aka Archana Mittal takes care of English Literature. It is fun!”

After a hectic day at work, I find myself going back and sitting with my on-screen “buddy” Krish- Sameer

In the upcoming episodes of Bin Kuch Kahe, Myra will discover Kabir in her washroom and while fighting, they will accidently get locked up in there. When Abha and Sudha will enter the house, they hear sounds coming from Myra’s room and will get alerted thinking it’s a robber. Later, they will find out that it’s Myra and Kabir who were stuck in the washroom. Will this create more tension and misunderstanding between Myra and Kabir?

Bin Kuch Kahe airs every Monday to Friday at  6:30 PM, only on ZEE TV.