Colors’ Kasam Tere Pyaar Ki recently saw a major turn in the storyline as the show took a conceptual jump of eight years.

Now, the maker (Balaji Telefilms) will bring some riveting sequence which will leave audience on the edge of their seats.

Viewers are already aware about Rishi (Ssharad Malhotra) and Tanuja (Kratika Sengar) living separately. Rishi is married to Netra (Praneeta Sahu) and he is staying with his daughter.

While on the other hand, Tanuja is residing with her and Rishi’s daughter Natasha along with her boss Abhishek Khurana (Amit Tandon), a successful businessman.

In the coming episodes, Rishi will learn that Abhishek Khurana took more than 20 percent share of his business, hence he will decide to meet him.

Abhishek and Natasha will plan to visit Mumbai and they will insist Tanuja to come along. Audience will witness some hit & miss moments between Rishi and Tanuja as the latter will enter the same place and both would sense each other’s presence.

We hear Natasha will leave her teddy bear near Rishi. Later, Rishi would decide to handover the teddy  to the lost and found counter.

What will happen next? Will this meeting bring a new twist in Tanuja, Rishi and Abhishek’s lives? 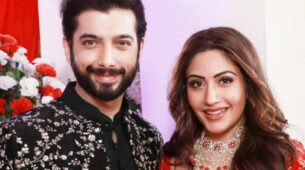