Daayan 6 july 2019 Written Update of today’s episode we see how the family wanted to abort the baby out of fear but Aakarsh warns them not to. 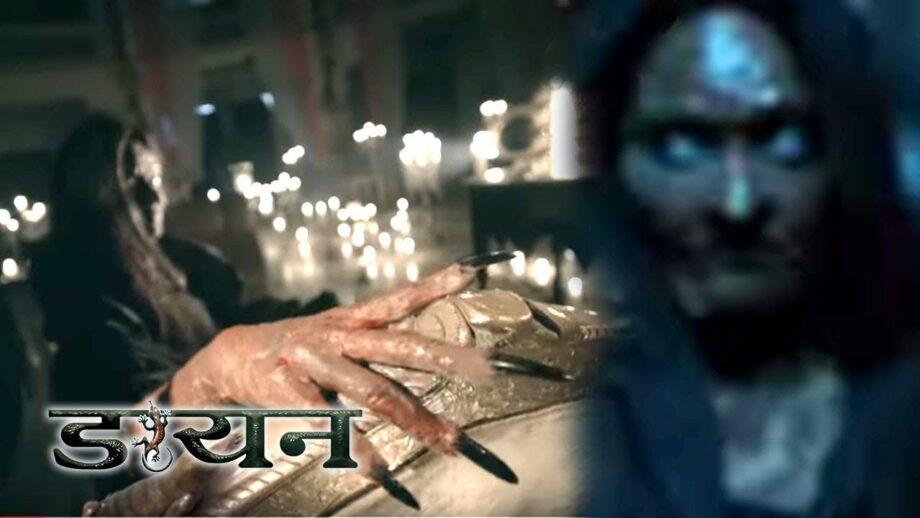 Today’s Daayan 6 July episode begins with Veer and Prachi sleeping separately on their wedding night reminiscing their love for each other and then thinking about Prachi’s changed rude behavior. Daayan was watching them via black magic said it was time for Prachi to become her puppet again. Veer walked to Prachi. Prachi shouted that he came to molest her and could not wait for a bit, he would get punishment. She hit his head to a wall repeatedly. Veer fell unconscious. Prachi fell back asleep. Daayan laughed and said Jahnvi snatched her son from her, now she would make Jahnvi’s dear ones Prachi and Veer’s lives a hell. She saw Harsh praying to appear in front of him and trying to slit his wrist and thought one more sheep from Jahnvi’s (Tina Datta) family waa falling prey. She appeared in front of Harsh and asked what he wanted. He requestes her to relive his wife Jananta. Daayan said she cannot as she had promised her son Aakarsh (Mohit Malhotra).

Harsh said he would not inform her. She said it was not easy to relive a dead person and he had to prove his loyalty for her first. He said he would do whatever she said. Veer woke up shouting after dreaming Prachi stabbing him repeatedly. He did not find Prachi in room and searched her. He thought Prachi really attacked him last night, his family hid the fact that she was mad and dangerous, he needed to confront them. Vishakha and Prithvi heard him shouting and asked happened. He said he would inform later and continued calling Prachi. Family asked what happened. Jahnvi asked to calm down. Veer said Prachi attacked him and family hid truth that Prachi was mentally unstable. Jahnvi said he was mistaken. Veer said they all betrayed him. Prithvi warned to not speak bad about his sister, else he would not care who he was. Veer said he was not lying. Jahnvi said they would talk to Prachi itself. They all searched for Prachi, but couldn’t find her. Harsh kidnapped Prachi on Daayan’s order, asked if she did not want her bhabhi back, and hid her in a trunk.

He then joined family and said he would also search for her. Aakarsh saw Satrupa and asked where was Prachi. She says how does she know, she was just interested in him and their children. Aakarsh warned not to call his and Jahnvi’s baby as hers. Dipank heard sound from a room and rescued Prachi from the trunk and took her to family. Family asked if she was fine and where she was. Dipank said he found her in a trunk. Family asked Prachi who did it. Daayan hypnotized Prachi and controlled her. She pointed at Veer. Prithvi brutally trashed Veer, and Harsh said he would call police. Jahnvi stopped them and said they should find out truth as coin had 2 sides, she did not want Veer and Prachi’s wedding to end within a day. Family walked away. Jahnvi asked Veer to tell what happened. Veer thought Prachi broke their relationship by accusing him wrongly and walked away without speaking. Aakarsh thought something waa wrong. Jahnvi asked Aakarsh if he did not think something was wrong, she was sure his mother Asha Daayan was doing all this. Harsh relaxed thinking Prachi did not remember anything and saved him. Daayan emerged and said she made Prachi lie. Harsh asked why she was troubling Veer and Prachi, their relationship would end if this continues.

Daayan said he cleared one step towards reliving Jananta and said she was thinking of making him her senapati. He said he would do anything to relive Jananta. She said he should start process to become daayan as only daayan could become her senapati; ideally Aakarsh had to be her senapati, but Jahnvi was controlling him. Aakarsh reached Daayan lok and called Daayan. Daaynan reached there. He asked if she was hypnotizing Prachi. Daayan denied and took false oath. Aakarsh returned to palace and informed Jahnvi’s family that his mother was not in all this. Jahnvi felt weak and pale. Family got concerned. Satrupa entered and said it was her child and it’s drinking her blood, so Jahnv was getting weak and pale. Jahnvi warned to stop lying, baby consumed mother’s food and energy. Prachi remembered alleging Veer and woke up thinking how could she accuse Veer when she loved him so much. She realized Daayan was hypnotizing her and pleaded Asha Dayaan to leave her and Veer. Daayan hypnotized her again. In living groom, family discussed that Veer was wrong and they would keep him away from Prachi.

They then discussed that they should find out if Jahnvi’s baby was really hers or Satrupa’s and requested Brijesh to help via tantra. He agreed. Aakarsh asked Jahnvi if she was fine. Jahnvi said yes. Family walked in and said Satrupa told Jahnvi’s baby was hers, so they wanted to do tantra and find out truth. Aakarsh said he already told that baby was Jahnvi’s and he would not allow anyone to do tantra on her. Family insisted to agree. Aakarsh asked Jahnvi to explain them. Jahnvi said she was ready to undergo tantra for their satisfaction. Brijesh did tantra keeping something on Jahnvi’s stomach and it fell down. Satrupa emerged that she told already that baby was hers and if they tried to harm the baby, she would not spare them. Aakarsh warned to not claim his baby as hers and attacked her, she disappeared.

He then requested family again not to trust Satrupa. Family said they could not lose Jahnvi, so they would get her abortion. Aakarsh warned if they again thought of aborting his child, he would not spare them. He took Jahnvi to their room and asked how could they think of aborting a child which had not even developed well. Jahnvi said her family was concerned for her, she knew that the baby waa theirs and she would protect it. She said she wanted to tell a secret that babies could listen everything and learn, Abhimanyu learnt to break chakravyuh/circle in his mother’s womb. He smiled. She said he looked handsome smiling and asked what should they name their baby and suggested Chintu. Veer said name should be strong like, Rajshatru, Ajatshatru and Kaalshatru. She asked him to list names, she would decide later. The written update of 6 July 2019 Daayan episode full story ends.

In the upcoming episode of Daayan, we see Janhvi faints. Prithvi stated that they will abort the baby without informing Aakarsh and Janhvi. Aakarsh is scared that the baby is Daayan blood and Janhvi is stabbed by Satrupa . Stay tuned!