Today’s Ek Bhram Sarvagun Sampanna 30 May 2019 episode begins with Prem thinking back to his memories with Janhvi’s father as he looks at the old house. Amma asks him if he remembers anything but PK brushes her off. As a part of his campaign, he sweeps the streets and requests people to vote for him. While talking to the people, Prem suddenly loses his balance and falls into a patch of cow dung. Amma tells him to go clean himself up at a nearby place. A villager approaches Prem and praises him for helping the people but curses the docter. Prem agrees and says how the doctor was the one responsible for the death of innocent lives.

This angers Janhvi and she brings out an iron rod to hit him with, but Amma intervenes and tells her to calm down.

Kavya and Kabir come back home. She asks him why he was acting so strange at the principal’s office. Kabir asks her if he tells her the truth, will she be able to bear the pain. In the end, he is unable to go ahead and reveal the truth.

The Mittal family all gather together to celebrate Chanda’s birthday. Janhvi tells Kabir that he should reveal Vyom’s truth to Kavya soo. 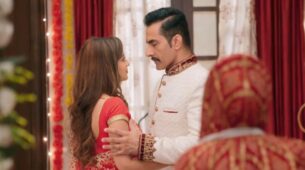