Kahaan Hum Kahaan Tum 05 August 2019 Written Update of today’s episode we see how Pari get stranded at the road and Rohan offers to help her. Today’s Kahaan Hum Kahaan Tum 05 August episode begins with Sonakshi (Deepika Kakar) writing the dialogues on Rohit’s (Karan Grover) file. Rohit stared at her. Deepa signed him. He read the lines. Sonakshi said just pause and say the lines in anger, goons talked like this. He asked were goons invited in fashion show. She said who thought of the logic, just call and say this. He said she wasn’t related to logic, goon would talk in English, not hindi. She said no, if Sumit heard English, he would say happy diwali and end call, say the dialogues as she say. He asked her to say again. She acted. He said enough, surgeon had to become a goon. She said no, goon who had become a surgeon. He called Karan and Sumit at the same time.

He said he knew what he did on the night of fashion show, he will expose him. Sumit asked who he was. Rohit said his bad fate. Karan said he didn’t know him, this bad joke will be proved costly. Rohit said he will send his pics to Rohit and Sonakshi. Sumit said don’t do this. Karan asked what he wanted. Rohit said he had to meet him tonight at 12, he wanted money, 20 lakhs, new notes, and address was the mill areas, back compound. He disconnected. Sonakshi asked Rohit to switch off the phone. Rohit said he did it like an experienced tv actor, they would have got scared. Sonakshi said well done, it was too real. He said he hoped the real culprit was caught. She said they had two hours, she will go and see mum once. She picked her stuff. Sumit said he have sent Vibha on a holiday, he didn’t need to be scared. Rohit said they will meet near the mill. Rohit said they won’t wear burqa, wig or fake beard. Sonakshi nodded. Deepa said wow Rohit, he was easily reading Sonakshi’s mind, not bad.

Rohit saw Sonakshi. Deepa said they shall go now. Dolly scolded Karan for dropping the fire sparkles on Sonakshi. She said stay in her house, how will he get money now. Karan said who was doing this bad joke with him. Sonakshi came to Pulkit and asked where Pari was. He said don’t know, mum was better now. Sonakshi saw Suman sleeping. Sonakshi said where Pari was. Pari was on the way and tried to get a cab. She didn’t get booking. Sonakshi asked nurse about Pari. Nurse said she left. Sonakshi saw the lady and said she was worried as her mum was much ill, shall they take selfie now. The lady said in her phone, thanks and sorry. They took selfies. The lady said she was so good. Sonakshi called maid and said mum was fine, did Pari reach home. Maid said no. Sonakshi said how she went without informing. Maid said don’t know when will Pari come. Pari’s heels broke. She got hurt. Rohan saw her and stopped the car. He greeted her. She said she was finding a rickshaw or taxi. He said he will drop her as it may rain anytime, it was late. She said she will manage. He asked her to sit, he will drop her.

She said she had to call home. Sonakshi took care of Pulkit. She said she still had an hour, she will take some rest. She thought of Rohit. She said she was confused and started thinking about Rohit. She compared Rohit to her ex finance. Vimmi saw Sonakshi’s show and cried. Rohit said Parvati’s devotee. He sat watching the show. Ajit came and looked on. He asked what happened. Vimmi and Rohit asked him to stop. Rohit said he was not watching it, Vimmi was watching it. Vimmi said he can watch it in hospital; he got interested in this right. Rohit imagined his nurses and staff watching the show and crying. He said Parvati isllwas the best, she knew everything. His imagination ended. Rohit said stop watching this, he didn’t watch it. Ajit said he had much work, come for a drink. He said he forgot to say he was taking star tv subscription for him, so that he can watch Sonakshi’s show, they weren’t idiots, when he sees Sonakshi, his cheeks turn red like an apple. Rohit thought of Sonakshi. He recalled the slap. He said Ajit, don’t say this again, he heard tv sound and went to see what was going on, he didn’t go to see parvati’s serial, it didn’t matter if he read her mind, such relations don’t form twice in life. The written update of 05 August 2019 Kahaan Hum Kahaan Tum episode full story ends here.

In the upcoming episode of Kahaan Hum Kahaan Tum, watch Rohit and Sonakshi decide to execute the plan but Sonakshi gets caught. Stay tuned! 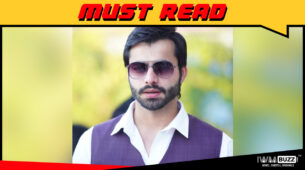