In Naagin Written Update Season05 Episode25 31st October 2020, we see that Jai wants to kill Veer and he asks hypnotised Bani to kill him. Jai plans to take Bani away from Veer The episode of Naagin starts with Veer telling Bani that he will not allow her to meet that Dhaba Wala for next 24hours. Veer challenges Bani that she will confess her feelings towards him in 24hours.
Earlier, Veer tells Bani that he is tired confessing his love for her. He says one day she will accept that this is love, and go to sleep. Jai puts liquid in water and the smell of that liquid hypnotise Bani, her eyes turn red and she goes out.
Bani comes out and sees Jai. She tells him that she got hypnotised and came out.

Jai asks Bani to attack Veer when he comes out and then kill him. Bani shouts Veer’s name. Bani takes a knife and says she will cut her wrist. She exclaims that she wants to be with Jai. Bani gains conscious from her hypnotizing effect and sees the knife in Veer’s hand. Bani tells him she prefers to die than be with him.

Veer invites Bani for the party to keep watch on her. Bani gets ready as a dancer. Mayuri thinks that she will help the Aadinaagin and says that they don’t have to dance as she will be dancing. Mayuri dances close to Veer.
Bani asks Meera to focus as she thinks Meera is losing her focus. Jai wants to take Bani away from Veer. Bani is about to leave and Veer asks her to wait.

PRECAP: Bani stabs Veer. She tries to stab him again when other Bani arrives and stops her. 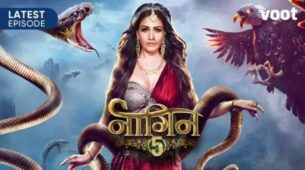