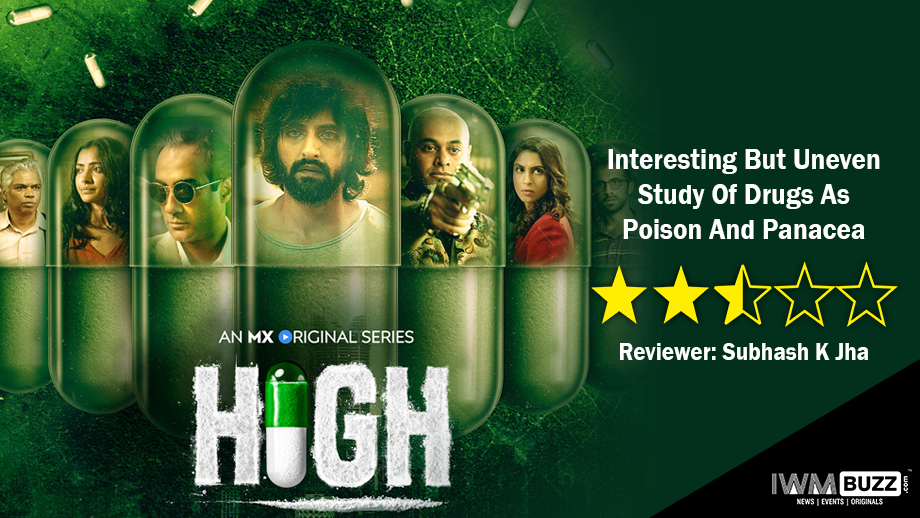 Akshay Oberoi’s sterling performance as a drug addict kept me going through this interesting but uneven study of drugs as poison and panacea, and how pharmaceutical companies make sure that civilization remains sick enough to be dependent on prescribed medicines.

It is one helluva an idea and I am not sure the series is able to do justice to the ambitious plot which sweeps across time zones from the 1970s to present times. The time-shifts are neither smooth nor conclusive and the characters keep coming and going as per the convenience of the storyteller rather than the story.

What holds the doddering shifty narration are the performances. Ranvir Shorey as a mysterious hitman can play this kind of role with his eyes closed. He is consistently engaging even if the script lets him down. There is this very interesting daroo ka adda sequence where Ranvir meets a couple of homophobic drinkers. Though well-written the sequence doesn’t add up to say anything except that maybe Shorey is traumatized by his sexual preferences.I am only guessing.

There are other characters who hover over the plot’s precipitous purview barely registering their services to a cause that grows progressively smudgy with all kinds of governmental agencies and politicians, mafia dons and desperate goons using their muscle power to stop the rampant distribution of a magical medicine called magic which stops drug addiction.

The main villain Munna (Kunal Naik) is menacing, snorting powder and venting spleen on his gang, but softening in his girlfriend’s company. Munna is even shown manicuring his girlfriend’s feet. Nice.A metrosexual Mafioso.

There are other more immediate issues that the plot fails to reserve. My main problem with this partly-engaging manifesto on the pharmaceutical mafia is the role of the investigative journalist. As played by Mrinmayee Godbole the journalist is a bundle contradiction. She seems incapable of placing the contentious issues in a perspective in the way her elder sister, a social worker, is shown to do.

In the absence of consistency the journalist just seems angry and defiant with little scope of achieving anything that can change lives. And why must all workaholic female journalists be shown smoking?

Ms Godbole has one really laudable sequence when she walks out on her job after throwing a blunt object at her editor. How many times have I wanted to do that?!

Finally, it is Akshay Oberoi’s Shiv Mathur who keeps the faith alive. He is a desperately unhappy drug addict whose only soft spot is a grandmom in an old folks’ home and who walked out on his girlfriend years ago without warning. This guy is seriously troubled. You can see it in his aimless walk, barely audible talk. In truth, Oberoi’s performance stands above the plot which swings dangerously from interesting to unconvincing, depending on which side of the mid-narration you are standing on

Also Read:Review Of Ginny Weds Sunny: Is The Nemesis Of Romcoms