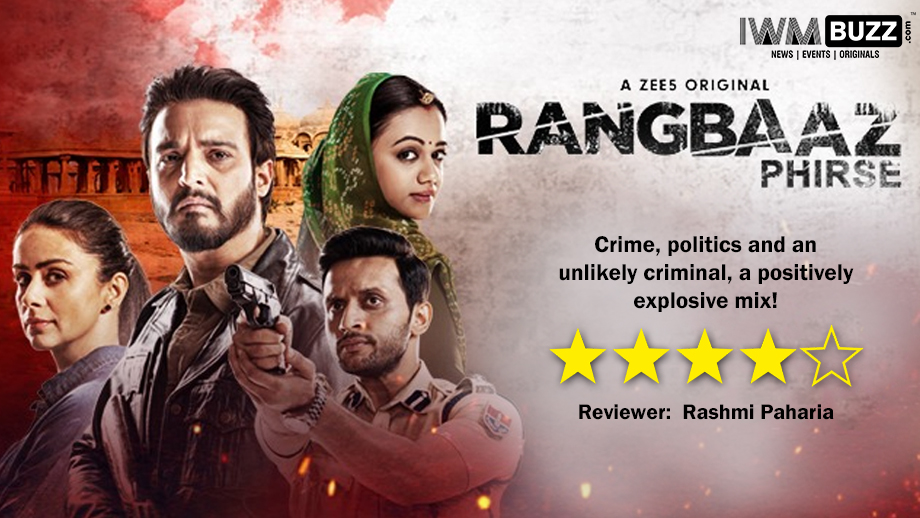 What goes into making an outlaw out of a perfectly lawful citizen? Is it the socio-economic status of a man that drives him into becoming a criminal? Is it an innate need for living life on the wild side, to loot, plunder and kill with impunity? Or is it the final straw that a desperate man clutches at for survival? Most would say, yes; it is certainly any or all of the above. What turns a man into a criminal is seemingly a cut and dried, foregone conclusion in most people’s holier-than-thou mentalities.

But ZEE5’s latest crime thriller web series, Rangbaaz Phirse, will turn your understanding on its head. And open your eyes to an unpalatable truth, a truth that will shatter long-held beliefs about the clear line demarcating criminals and the common man. It will tell you how a rabidly corrupt and debauched political system of a nation glories in turning innocent young do-gooders into hardened criminals.

Rangbaaz Phirse is the intensely hard-hitting, explosive story of a gifted young man, with numerous academic accolades to his name, who turns into the most-wanted criminal of the notoriously crime-infested state of Rajasthan. It is the story of Amarpal Singh, a UPSC rank-holder, who turns into dreaded gangster Amarpal. Rangbaaz Phirse showcases in vivid detail, the life and times of a man who wasn’t born a criminal, laying bare the grisly specifics of his chequered life, in nine, finely-nuanced episodes.

The story is set in small-town Rajasthan, in Amarpal Singh’s (Jimmy Shergill) big dreams. He wants to clear the UPSC exams, and become an IPS officer. But that is not where our protagonist falters. The first whiff of trouble appears when he experiences first-hand the caste-based power play in his native village. It is everywhere – in society, at university, in the social mores.

The university he studies in even has separate hostels for the Jats and the Rajputs, the two major castes of Rajasthan, which are forever at loggerheads with each other. Always a topper, he is coerced to run for the student elections in his university. That chapter passes peacefully enough, with Amarpal Singh proving himself an able President of the Students’ Council of his university.

This is also when he makes a staunch friend in Jairam Godara (Sushant Singh). Amarpal saves Jairam’s life and in return, the braveheart Jat becomes indebted to him for life, vowing to even lay down his life for Amarpal’s sake. Incidentally, Amarpal Singh is a Rajput, while Jairam is a Jat, but their friendship rises above their castes. In between, Amarpal also finds the time to get married to young and pretty Rukmini (Spruha Joshi).

Caste, however, plays a crucial role at every turn of his life, ultimately leading him into the murky world of politics and district elections, where he has to contend with the deep-rooted rot in the system. His wily opponent Ravi Ram defeats him by two ill-gotten votes, gets him arrested and tortured in jail on false charges, courtesy his high connections with the much-feared bootlegger Raja Phogat (Sharad Kelkar), who in turn has all the top politicians of Rajasthan in his hand.

The disturbing sequence hastens Amarpal Singh’s descent into a dangerous whorl of crime and politics. Amarpal comes out of jail, a changed man. He takes the hand that fate has dealt him and turns it into a winning one. Breaking Raja Phogat’s hold over the region becomes his raison d’être.  He learns the ropes of the game pretty quickly, and even bands together his own trusted troika – consisting of him, Jairam and Balram Rathi (Amit Sial). And when he commits his first premeditated murder, killing Ravi Ram, the transformation of Amarpal, from gifted student to hardened criminal, is complete.

Rangbaaz Phirse chronicles this transformation in minute detail, taking us along in the journey of the makeover of a soft-spoken, genial Amarpal into the criminal with 10 lakhs prize money for his capture. His metamorphosis is at once stark and spectacular. We watch in mesmeric enthrallment, as the shy and wary young student becomes the feared criminal who lives life to the beats of his self-composed gangsta rap.

The transformation of a UPSC topper and aspiring IPS officer into a hard-core criminal is both shocking and heart-rending. Your heart bleeds for the gifted life gone rogue.

Once initiated into the world of crime, Amarpal is unstoppable. He dodges the clueless Rajasthan police, led by Sanjay Singh Meena (Mohammed Zeeshan Ayyub), with calm disdain, plans crimes with cold-blooded nonchalance and carries them out with practiced ease. Amidst all this, he keeps his family well-protected. He whisks his daughter Chiku (Mahima Makwana) away to an unknown hostel, so that a thirsty-for-his-blood Raja Phogat doesn’t get to her.

Amarpal receives support from an unlikely source in his fight against Phogat, in the form of sophisticated stockbroker, Anupriya Chaudhary (Gul Panag). What makes a Mumbai city-bred sophisticate dive headlong into the crime milieu of Rajasthan’s hinterlands is a fascinating enigma, making Anupriya’s character worthy enough of a spin-off show of its own. After all, the Rangbaaz franchise is all about how criminals are born. The first edition had dealt with the rise and fall of the notorious Shiv Prakash Shukla, just as this one is about Amarpal Singh.

But it is not the world of crime that leads to Amarpal Singh’s ultimate downfall. It is something that is even more depraved than the worst of crimes and criminals – and that is politics and political leaders. A host of crafty and cunning politicians use Amarpal for their own selfish gains, discarding him when their deed is done. Sundar Singh (Harsh Chhaya) and Chief Minister Savitri Devi (Mona Ambegaonkar) prove to be the worst of the lot.

Rangbaaz Phirse unmasks the caste politics at play in elections, widespread in a large part of the country, but specifically in Rajasthan. Shrewd politicians pit the Rajputs and Jats against each other, instigating violence, mayhem and bloodshed in the name of caste systems. The nation, its economy and development, bear the brunt of the violence while politicians laugh their way to power. It takes guts to show all this on screen, and Rangbaaz Phirse displays those guts in abundance.

But what sets the series apart from the scores of others based on larger-than-life outlaws is its emphasis on emotional play. Amarpal Singh is an inherently good man, driven only by a burning need for revenge. He has his emotions in the right place – for his parents, his men, his wife and, most of all, for his daughter. His love for his daughter also makes him do what he does in the end. Indeed, the last episode is rife with emotion, and you shed a few tears–surreptitiously–at the emotionally-wrought finale.

Rangbaaz Phirse is a masterfully made crime drama, the after-effects of which will stay with you long after you’ve finished watching the show. The unnerving story of a good guy gone bad will wrench your heart and twist it with its pathos-laden undertones, until you feel a numbing pain in your chest for the promising life lost to a disturbingly sinister political system.

On the surface, it is simply a tale of the rise and fall of a dreaded criminal. But underneath its seeming simplicity lie manifold layers of harsh reality – the evil absolutes of the ominous politician-police-criminal nexus that is widespread in the country.

Rangbaaz Phirse is a gritty expose of the modus operandi of politicians, who prowl the political landscape in the hinterlands of the country, preying on the fears, vulnerabilities and insecurities of gullible young men, fanning caste wars and caste differences for their own selfish gains. If only new India could learn a thing or two from such shows, half its battles would be won.

Jimmy Shergill is terrific as Amarpal Singh, displaying an arresting savoir-faire in capturing the nuances of the character. He is especially good in the tender moments in the narrative. Sushant Singh is solid and dependable, giving an incandescent performance. Mohammed Zeeshan Ayyub, Amit Sial, Sharad Kelkar and Gul Panag have put in remarkable acts, pulling off the characterisations brilliantly. Mohammed Zeeshan Ayyub’s Sanjay Singh Meena acts as the narrator of the story, revealing tiny facets of the narrative in the voiceover that may be staring us in the face but which we fail to notice. Kudos to the stellar storytelling skills of the writer and director for that!

In fact, Siddharth Mishra’s sparkling writing gives wings to the fledgling story, keeping us riveted and invested in Amarpal Singh’s spellbinding journey. Sachin Phatak’s direction is the keystone of the series – an exemplar of excellence in storytelling. Each scene of the show has been lovingly written and picturised, with obsessive attention to detail upstaging all else. The story unveils in a non-linear fashion, flitting seamlessly between the past and the present, with nary a discordant note marring the flow of the story and the proceedings.

The edgy background music adds to the gravitas, as the script unravels. The narrative is based on the true story of Rajasthan criminal, Anandpal Singh, and the makers have tried to stick as true to the facts as possible. A simple Google search tells us how close Rangbaaz Phirse is to the original story. He was a modern-day Robin Hood for the poor of Rajasthan, regularly holding ‘baithaks’ at his mansion, where anyone could air their grievances and find a solution to their problems.

The series captures all these points in vivid detail, sacrificing frivolous show-sha at the altar of studied meticulousness. But then that’s what makes the story so compelling to watch. It is stellar writing and direction – storytelling at its very best. Rangbaaz Phirse is a must-watch for sure, and we recommend you binge-watch it soon as possible.

10 Guru Randhawa's Most Popular Songs to Listen to