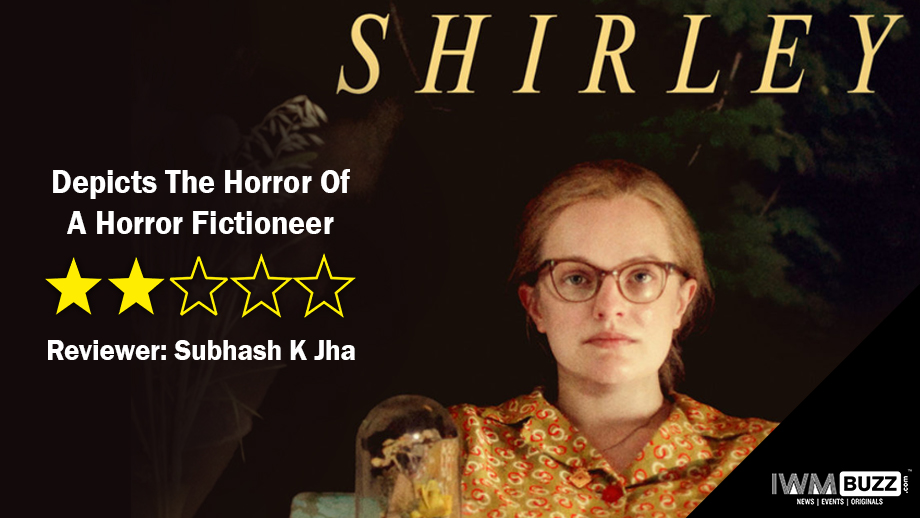 Shirley adds to the glum morose doomed mood that the movies these days from Hollywood insist on thrusting on us. I really want to see a happy film in America. Shirley is a painfully unhappy dark depressing study of author Shirley Jackson who wrote a bizarre horror fiction that apparently was a big-turn on for her fans.

In fact, at the very beginning of this tediously cataclysmic drama of dread and doom, a fan of Shirley gets so sexually excited by the horror fiction that she and her husband make out in the speeding train. All through the film images of love-making are juxtaposed with the portrayal of the creative process as some kind of self-flagellation.

The couple caught in a compromising position in the train and later in the treatment they received from their hosts, is Rose (Odessa Young) and her husband Fred (Logan Lerman)and they are heading to the home of author Shirley Jackson (Elizabeth Moss) and her academician husband Stanley Hyman (Michael Stuhlbarg) who are the worst possible hosts possible.

Just why Rose and Fred would agree to stay on as the writer and the academician’s unpaid apprentice for weeks and months is unexplained by the screenplay which leans so heavily on the dark side it finally trips and falls into the bottomless abyss.

But still. There is no telling about tastes. If you are a fan of Elizabeth Moss—I am not—then this film could be a dark aphrodisiac. I last saw Ms Moss in the eerie thriller The Invisible Man just before the lockdown where she was battling her dead husband’s spirit. Here in Shirley her character is at war with her self, a war she insists on thrusting on all the people around her who are unfortunate enough to come into her range of firing, us the audience included.

If you have seen the director Josephine Decker’s previous film Madeline’s Madeline (which I hated) you would know she creates askew characters seen from attitudes and angles that are unimaginable to ordinary human beings. The story of Shirley Jackson need not have been told as mirror reflection of her morbid fiction. More exhibitionistic than exploratory, Shirley gives us one of the most unpleasant heroines I’ve ever seen in the movies.

After watching the film on her life I am glad I never read her fiction. If she is as monstrous as her writing then we are better off without knowing her. Unless you are a sucker for dark desperate dramas, skip Shirley.