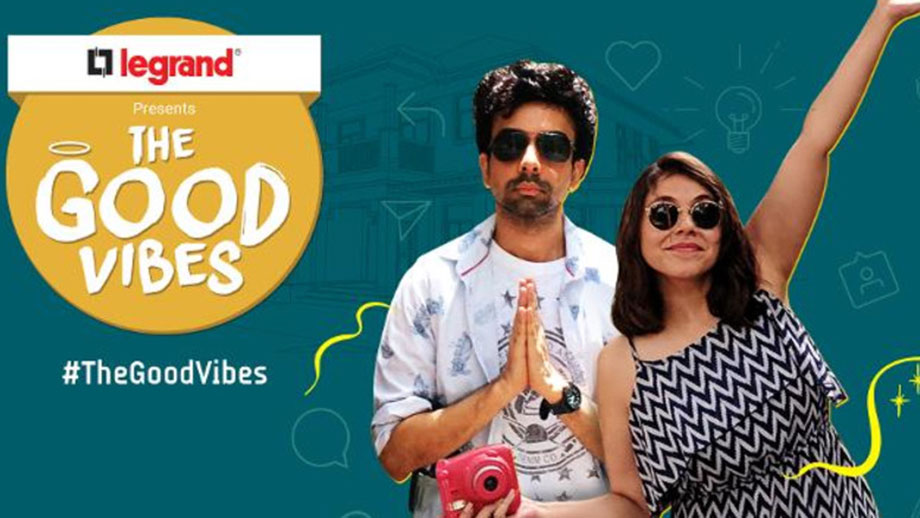 It was a perfect weekend morning when I geared up to watch the web-series, The Good Vibes, presented by Legrand. And must tell you, I got into a party mood within no time!!

Yes, to party is the key to enjoy life!! And how well does the protagonist Lakshya convey this…

The opening scene gives us a glimpse of the full-of-mess house, courtesy the late night party that the couple Lakshya (Naveen Kasturia) and Jonita (Maanvo Gagroo) have thrown at the their lavish bungalow.  Viewers are quickly made aware that this is mostly a daily routine in the house, which is 24*7 thrown open to friends and well-wishers.

The bungalow, one of the poshest in Juhu, has real ‘good vibes’, as the friends of Lakshya and Jonita say!! And it is the place for all the good things to happen, whether it is to propose a girl friend or for friends to mingle. And yes, we were simply amazed with the idea of Lakshya (clicking pictures before the posh bungalows, and sharing it on Instagram, thus gaining attention of houseowners) to get possession of such a bungalow!! Cool idea, isn’t it?

Amidst all this thrives the working woman and not-working husband and the intricacies related to it. Though as a wife, Jo keeps telling Lakshya to stop the partying habit and get to earn, she goes to the extent of siding her husband before friends, and even calls the phase as ‘paternity’ break just like a woman takes a maternity break!!

But yes, she does question Lakshya on how long she will be able to party along without calling a spade a spade!!

Finally she lays down an order of not having another party for the next month or so, that is till the time they arrive at their first wedding anniversary date wherein they can throw a huge one for family and friends. But oh well, Lakshya is forced to break the order the very next minute, as he wants to help his friend in need (who wants to breathe in the ‘good vibes’ of the house and propose his girl friend).

We are also introduced to the two sets of parents – Rituraj Singh and Kishori Shahane playing Lakshya’s parents and Anant Mahadevan and Mona Ambegaonkar playing Jonita’s.

Rituraj who owns an electrical shop (Legrand) wants his son to invest time into a work and get involved in it. But the son just cannot spare time to think about anything else than partying!! The mother too tries to correct the son, but cannot!! We have Jo’s mother who is an ardent ‘bhakt’ of a Guruji and keeps coming up with weird things that one needs to follow in order to set their planetary positions right. Above all, we have Jo’s father who simply nails it when he says that ‘Lakshya has a life-time investment in his daughter Jo and need not bother about anything else’. Hard to accept, but true that!!

But yes, this stern and sarcastic statement finally seems to have made inroads into Lakshya’s brain, as we saw him attending a meeting to discuss his work and business plans. But him not getting successful in grabbing the work is another thing.. But at least he is trying…

In the fourth episode streamed till now, it is made evident that he is out of his party mood and wants to uninvite himself from such parties. And this actually makes Jo uncomfortable, as she is not used to seeing this mood of Lakshya.

The story is poised at a phase where something has to happen and emotions within have to explode. We are also given hints by Jo whether they would even call off their marriage and not celebrate their wedding anniversary which is to happen in a month.

We certainly would want this cute-looking couple to patch up, hug and forget their past and look forward to a bright future!! Lakshya and Jonita are so cool, very relatable to the couples that we see around us. Jonita loves her husband (made clear in the love-scene shown when the electricity goes). Lakshya too wants to obey Jonita and does not want to make her unhappy at any cost. All this shows of the basic foundation laid well with love. But Jonita’s desire to have a hard-working husband and not a hardly working husband is the only thread of concern.

Having said this, the concept of gender equality, that too when it comes to the woman being the bread-winner and the male managing home, seems to be a far-fetched thought when it comes to the Universe we live in!! Women considering the grit and valour they show, can excel in any career they take up, but is the man gutsy enough to handle the ordeals at home, especially when there is a big family with children and elders to cater to?

Coming back to the series, Naveen Kasturia and Maanvi Gagroo as Lakshya and Jonita are cute and adorable. They make for an amazing Jodi, and look good together. Their sense of timing, their cute nok-jhok, the way they stand up for each other, and their arguments indeed make for a good watch.  One thing is that you can keep watching this only amazing Jodi (Maanvi and Naveen) for the whole of the episode, yet ask for more!!

The elders in the cast have a cake walk in the roles given to them. Rituraj, Mona, Anant and Kishori create the right impact needed for the scene.

Produced by Bohemian Films, the series has been craftily directed by Sizil Srivastava. Music Directors Raghav and Arjun have done a good job with the music.

Overall, The Good Vibes is indeed fun watching!! There’s no second doubt about it. With the series available for streaming on Sony LIV and YouTube, it will bring in lot many viewers in the days to come.

We eagerly look forward to know whether the wind blows down the ‘Good Vibes’ in Lakshya and Jo’s ‘paradise’ or not!!

We at IWMBuzz.com credit this series with 3 out of 5 stars.