Vikram Bhatt’s Zakhmi is a decent watch, though poles away from being a must-watch 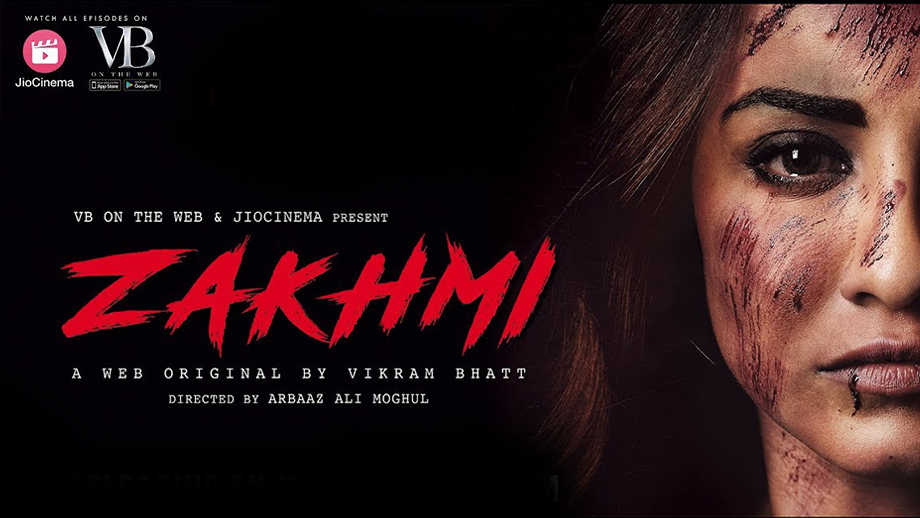 Hell hath no fury like a woman scorned. Or gang-raped, battered and left to die. And when she swears vengeance, there’s no power in the world that can contain her. That, in a nutshell, is the premise of Zakhmi, prolific film-maker Vikram Bhatt’s latest digital potboiler.

Vikram Bhatt’s collected enough goodwill in his long and chequered career as a film-maker, to know that any creation of his will sail through on the strength of his appeal alone. The master film-maker has taken to the digital medium like a fish takes to water. Within a few short years, he’s built up an impressive catalogue of digital shows, each of which has enjoyed phenomenal success upon release.

The latest show to hit the digital space from the stables of LoneRanger Films (for those not in the know, that is the name of Bhatt’s production company), follows the same vein as its predecessors– strong female protagonist, oodles of sex, dollops of suspense and murders galore.

The show opens with a battered, bruised, barely-alive Saira (Tia Bajpai), barreling her way out of a locked shipping container on the Hong Kong docks. The scene sets the tone for the murder, suspense and revenge drama to follow.

Saira is a happy-go-lucky orphan, working in a bank in Mumbai. She is wooed by a real-life Prince Charming; in her case, Rohan Mallik (Ruslaan Mumtaz), and they soon get married. A cataclysm disaster befalls her seemingly blissful world, when Rohan is killed in an accident. On closer inspection of the accident pictures, Saira realizes that things are not what they seem. All clues point to the fact that what was made to look like an accident was actually a murder.

Things start going downward from there. To stop  Saira from snooping around, a menacing goon with kohl-lined eyes, MK (Peeyush Suhaney), tries to threaten her into silence. When she resists, she is kidnapped, gang-raped, beaten up and left to die inside a closed car that is locked up in a container bound for Hong Kong. But our heroine survives and vows to revenge the murder of her husband and the atrocities perpetrated on her. Her quest takes her from a casino in Macau to a palatial house in Mumbai, and even into an arms-dealer’s den, in the outskirts of Mumbai.

Saira soon realizes that MK is but a cog in the colossal conspiracy wheel that is at the heart of the murder. She finds herself bang in the middle of sinister schemes, ruthless rogues and creepy corporate collusions. The supposed mastermind of this intriguing conspiracy is Amrita Sinha (Snigdha Akolkar), a cold-blooded businesswoman and owner of Sinha Industries, who will do anything it takes to save her company from falling in the hands of another.

In the midst of the melee, Saira finds a friend, ally and comrade-in-arms in Mohit (Vipul Gupta), who’s also out to revenge his sister’s murder at the hands of Rai Singh, co-conspirator in the suspense drama. The series takes an astonishing turn when Saira discovers that Rohan is alive and part of the conspiracy that destroyed her life. She adds his name to the list of conspirators she must kill, in order for her revenge to be complete.

Will our swashbuckling heroine get to the bottom of the conspiracy and take her revenge? Of course she will, but not before receiving a massive jolt to her senses. What is the jolt we talk about? We’ll leave that one for you to discover.

All-in-all, the series is quite a decent watch. Despite being riddled with loopholes, the plot manages to grab your attention and keep it. There are a few glaring anomalies in the story¬, that stick out like sore thumbs, in an otherwise well-written plot. The most obvious one is why did Rohan marry Saira in the first place? Why did he need to fake his own murder? How did Rai Singh not recognize Saira in the Macau casino, even though he was a significant part of Amrita’s conspiracy? The answers are beyond us, and better answered by the makers of the show.

Arbaaz Ali Moghul has done a pretty neat job of directing the series, while credit for the story goes to Vikram Bhatt himself. There are quite a few needless songs in the show, which tend to distract the viewer, rather than adding value to the proceedings. They were best avoided, in our opinion. But, the deed, as they say, is done, and nothing can be done about it.

Another thing we didn’t like is the pointless love-making scenes in the series. They seem to have been added only to titillate the sizeable male viewership, and nothing more. But don’t let those scenes put you off from watching the show. You can always fast forward the stuff they aren’t up your alley, like we did. Thank God for technology!

Tia Bajpai has done a commendable job as Saira. She adds credence to her character of a wronged woman, out to get revenge. She deserves credit for putting in a measured performance, in a role that could very well have been reduced to an over-the-top, screechy, shrew-like caricature. Vipul Gupta puts in a restrained performance as Mohit, though he could have infused a bit more vitality and verve into his role. Snigdha Akolkar was just about average as Amrita. The scenes where she spouts the choicest vernie cuss words were really funny, and so unsuited to her character. She really needs to put in a lot of hard practice at mouthing those words, for them to sound convincing, if she plans to keep at it in Season 2, that is.

Ruslaan Mumtaz just doesn’t cut it in a negative role. The sooner he realises that he’s tailor-made to play cho-chweet, chocolate-boy characters, the better for him. We liked him best in the first part of the series, when his negative persona is still under wraps.

To sum it up, Zakhmi is a decent watch, though poles away from being a must-watch. Watch it if you have time to kill, and nothing better to do.