Jamai 2.0 is being reviewed by IWMBuzz.com. 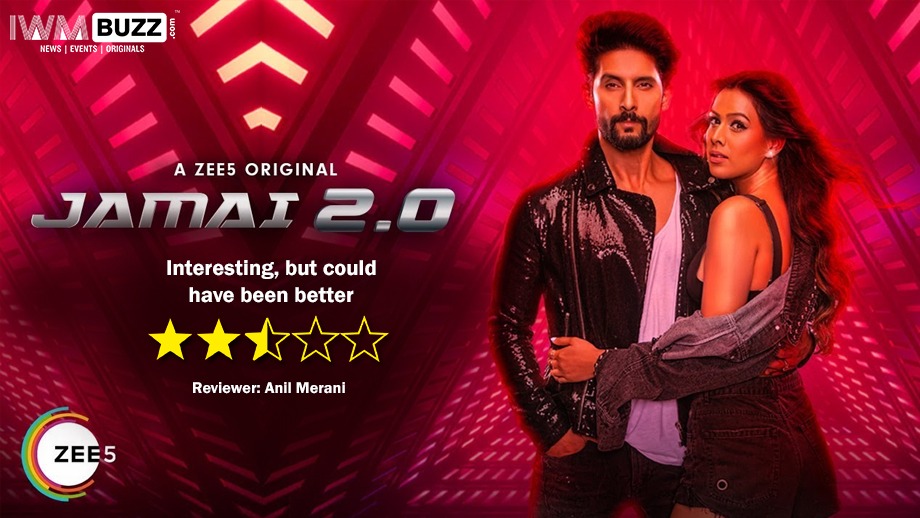 Zee Network has smartly used the title of their popular TV show Jamai Raja for their Zee5 web series Jamai 2.0, with the same lead cast (Ravi Dubey, Nia Sharma and Achint Kaur) and the character names.

That aside, the basic mother-in-law vs. son-in-law clash story is completely different. Here, Durga Devi, aka DD (Achint), runs a criminal syndicate in picturesque Puducherry, along with her brother Jatin (Bobby Khanna) and nephews Madhav (Pratik Dixit) and Vaibhav (Varun Jain) respectively.

DD ejects her woman-crazy partner Goswami (Sanjay Swaraj) from their gambling business after honey-trapping him in a fraud case.

Sexy Nia Sharma, as Roshni, does not see eye to eye with her mother DD, due to the latter’s estrangement with her dead father. Goswami then uses her as a snare to get back at DD.

The good looking Ravi Dubey enters the fray as a joker, Siddharth (Sid for short). He works as a stand-up artist in DD’S night club. He has a big axe to grind against DD and he too uses Roshni as bait, but then flips for her (he engineers an accident to meet her).

We could not get the reason why Sid put his chaddi in the bank locker, just an attempt to get a few laughs maybe (I did not even smile). Also the fight sequences leave a lot to be desired; Ravi was too mechanical.

She spends the night with him and he does not touch her. The scene where he makes her wear clothes was sensual. His excuse is that he can’t mess with DD who will get him fired. Interestingly, there was mild flirting between DD and Sid too. Will Indian culture accept the damaad hooking up with saasu ma?

When Sid dumps Roshni, she gets close to her childhood friend Paritosh (Akash Talwar) in order to make Sid squirm. Sid’s character has layers (himself tells DD to get Roshni married to above guy), which Ravi effectively portrays.

In the meantime, Tamil-accented cop Cheeram (Sudhanshu Pandey) takes over the city, promising the top brass that he would finish off the all-powerful DD.

Sid becomes DD’s Man Friday by saving her from the police when she goes to collect her. dope. But then junkie nephew Vaibhav gets picked up. The earlier scene where DD tells Vaibhav that the drugs they sell were not meant for personal use is a telling comment on how sometimes the chicken comes home to roost.

An angry Jatin then spots Sid and Roshni cozying up and threatens Sid that he will tell DD, who then clobbers him with a bat (was he that dumb to tell him, could he not have just called? )

Then, rather than letting him die, Sid gets him admitted to the hospital. Jatin half squeals his name before slipping into a coma.

On the other hand, Cheeram uses Vaibhav’s cold turkey condition to force him to change loyalties.

A lot of stuff happened before an all alone DD finally accepts Sid as Jamai, but there is a huge twist (throwback to first scene where a girl was shot in the pool). We will not say more, for fear of giving away spoilers. In one scene, Cheeram’s accent suddenly changes into that of up north.

Like all web series, there is no proper ending to Jamai 2.0 as well, with enough strings left loose for a sequel.

To be honest, the story was really dragging in the middle, only picking up steam towards the climax. Ideally, they could have made it more compact and wrapped it up in 6 episodes, instead of 10.

I also got confused whether I am watching a love story or a thriller. Producer Ashvini Yardi and director Shashant Shah wasted a lot of time in showing Sid’s inner clashes.

Nia has done a good job, but would it not have been better if the writers could come up with characters for her beyond the tried and tested angry gal who is always ready to drop her clothes at the drop of a hat.

But yes, here there were no major lovemaking scenes or nudity. Poor Ravi was quite uncomfortable kissing Nia (self-confessed). But it did not appear so on screen (the good looking dude can act as well).

The icing on the cake is Achint. She was really good, bringing out different emotions with élan

The character of Goswami was funny, always having him surrounded with girls seemed too much. Felt pathos for him rather than hate.

Sid’s friend Pritam was used just for emotional relief. There is nothing much to write home about Khatija Iqbal who portray’s DD’s secretary Shefali. Hope both have something more to offer in season 2 if it happens.

Producer Ashvini Yardi’s TV version was far better than this new web version. It would have been better if the story narrative had more punch to it.

Jamai 2.0 has not gone totally viral on SM so far. Can it be that the makers have decided to let the product speak for itself, rather than resorting to other techniques to create a buzz?