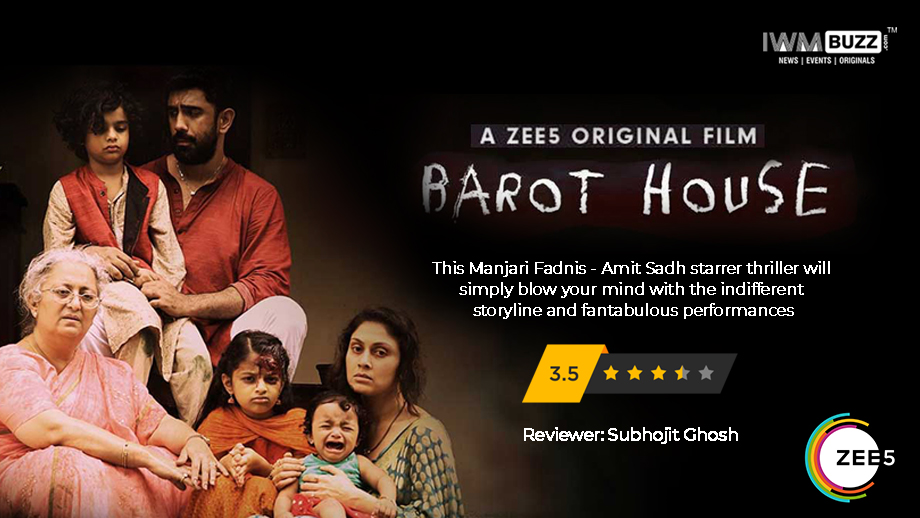 When we saw the trailer of Barot House, we immediately got the vibe that we are here to witness something different and quirky, something that we don’t see too often. Well, here’s to not disappoint you and start a detailed analysis of the movie with a one-liner – ‘The movie is amazing’.

Barot House opens up to a scene where the Barot family is seen enjoying Diwali celebrations in their abode of heaven. The family comprises of Amit Sadh and Manjari Fadnnis who play the mother and father to two girls and a boy, the boy being the centre of attraction and focus always for Amit. Although they live like a happy family together, there’s a lot more than what shows on the surface. Amit has serious doubts that the girls they are raising are not his children but a result of Manjari’s alleged affair with their neighbor, Anthony. Both Anthony and Manjari used to go to college together and were good friends. However, an element of doubt always lurks in Amit’s mind that there’s a lot more between them than just friendship and hence he often accuses Manjari in the most subtle way possible that they are not his children. However, amidst all this, peace still manages to prevail in the Barot Family.

Problems start when on the occasion of Diwali, the children are in a playful mood and one of the girls named Shreya decides to play hide and seek with her chachu Ajay (Amit’s brother) and hence ends up hiding in the graveyard. As Shreya hides, someone comes from behind and whacks the axe in full swing to kill Shreya. Ajay immediately becomes the automatic suspect as he was the one who apparently had the idea about Shreya’s last whereabouts. However, what’s shown is often not what it is. Same with ‘Barot House’ and the Barot family. What follows is a spree of killing involving a dog and a baby of a neighbor. Police suspect Anthony for the killing of the Barot child because his own dog was apparently killed by Malhar, Amit’s young boy accidentally, or how it is made to look like an accident. This puts the suspicion on Anthony as the angle of revenge remains in this case.

The narrative then takes a whole new turn altogether when Amit finds out more intrinsic details about the killings and is left totally shocked after knowing the whole situation. Although the police don’t believe his version initially, they go ahead with an apparent confession that’s sets a new tone into the storyline. However the climax unfolds into something totally unexpected and it manages to leave everyone shunned and stunned as to how the twist in the plot happens which is totally beyond expectation. To understand what this special well planned climax is, one needs to watch the movie as soon as possible.

IWMbuzz Verdict: The movie grips you from the beginning itself and there’s not a single moment in the film that will make you want to take your eyes off the screen. Every shot and every sequence is well planned and executed and only ends up adding to the collective potential of the movie. Director Bugs Bhargava nails it with his direction and storytelling ability. But without any doubt, the highlight factor remains the performances of the lead stars, Manjari Fadnnis and Amit Sadh, who simply managed to make acting look real in the true sense of the term. The expressions of sorrow, grief and madness are on point and it just won’t make you feel that it’s reel. Manjari has been spot on when it comes to gripping the emotions of a mother who has lost her all and Amit has done enough justice to his character by setting the tone of emotions into place. Overall, this psychological thriller is a must watch for sure and you can’t afford to miss this thriller as it is all set to simply blow your mind as to how realistic the actors have made it look. Overall, watch it for the performances and the amazing storyline and something totally unique in a while on the OTT platform.