When was the last time we had the pleasure of seeing the svelte Sushmita Sen? No, not on social media where she posts pictures working out with a man with whom her relationship is…well…finally working out. And good luck to that relationship.

In Hindi cinema she was last seen ten years ago in Anees Bazmi’s No Problem which contrary to its title, was extremely problematic for Ms Sen. Playing the prop doesn’t suit her. She looked like a fish out of water in No Problem. Ridiculously inapt.

For the next ten years she was seen only in one Bengali film Srijit Mukherjee’s Nirbaak where she was very at home and effective. She spoke Bengali as fluently as Rituparno Ghosh.

In the trailer of her comeback vehicle Aarya for the OTT platform(on Hotstar-Disney) Sushmita Sen looks smashingly. And she is very much at home playing the hero of the crime drama. That’s because director Ram Madhvani knows she can’t be cast as a prop. Whenever she is put in a film as a decorative doll she looks completely artificial.

Aarya casts Sushmita as a wife and mother who discovers ugly dark criminal secrets about her husband (Chandrachur Singh). The narrative struck me as highly formulistic: happy family disrupted by gun shots, we know the rest. The wife taking over her husband’s shady business can be traced to the recent Hollywood film Widows. Except that Widows didn’t focus on so many immaculate close-ups of Viola Davis’ bereaved face.

Aarya is a powerful showcase for Ms Sen in a series that seems gripping and designed to spotlight her powerful no-nonsense personality. The male characters, for a change, look like props, largely unaesthetic decorative embellishments.

We are told Ms Sen plays a woman who will go to any lengths to protect her family. Glad to hear that. But this maneuver seems her one last ditch effort to protect her career. Family be damned. And best of luck to that. Sushmita Sen starrer Aarya 2 to go on floors from November this year? Want To Become Fit And Stylish? These Aishwarya Rai And Sushmita Sen's Health Remedies Will Inspire You 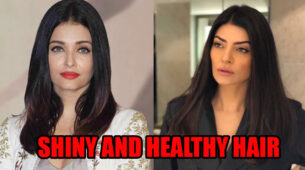