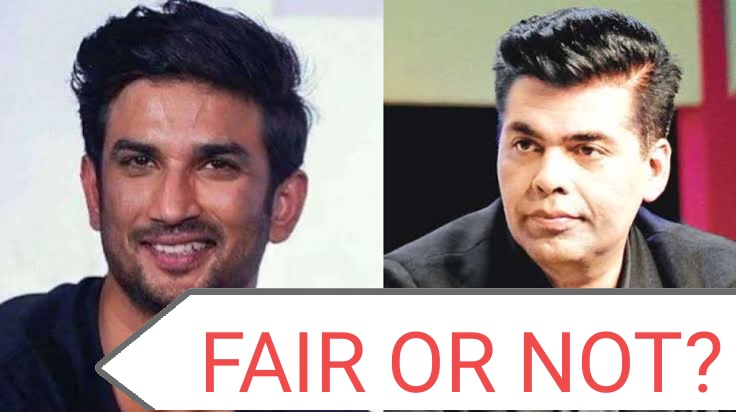 There’s absolutely no iota of doubt over the fact that Sushant Singh Rajput’s suicide has left a permanent scar in Bollywood like no others. It has once again given rise to speculations and new discussions around the ‘dirty side’ of Bollywood.

While we don’t deny the fact that nepotism is actually a prevalent thing in Bollywood, but the bigger question here is, is it fair to label just one man as the ‘King of Nepotism’ for the same?

Just to take out certain references, Hrithik Roshan was launched in the industry by his own father Rakesh Roshan in Kaho Na Pyaar Hai and the same was with Uday Chopra who was launched by the late Yash Chopra. While Hrithik eventually made it big in the industry, Uday’s initial failures made him quit Bollywood as an actor. So isn’t this the quintessential example of the fact that nepotism or not, it’s only talent that wins in the long run.

Sushant Singh Rajput, too was one such talent who fought against all odds to have a successful transition from TV to movies, a feat hardly few achieve in the industry. While there were reports and fake messages being circulated about major production houses banning Sushant, the reality is there’s no concrete proof about the same and assumption at the end of the day, is the mother of all problems. Whoever says Sushant didn’t have any movies in his kitty is clearly unaware of the fact that he was to be a part of two movies, one was with director Rumi Jafry and the other with Shekhar Kapur.

Yes, there’s no doubt about the same that Sushant had his own challenges and battles and the poor soul succumbed to those, but the point here really is whether is it at all fair to single-handedly blame Karan Johar for his suicide? Yes, we don’t deny that he does like to play his card of favouritism in the industry but let’s be fair ladies & gentlemen, he alone can’t be made a scapegoat for Sushant’s death. So that do you all think?

Is it fair to entirely blame Karan Johar for Sushant’s suicide? Let us know your views in the comments below and for more updates, stay tuned to IWMBuzz.com.