Review of The Zoya Factor: Only Sonam Kapoor's 'Zoya Luck' can clear this ball out of the boundary | IWMBuzz
Subscribe Now
Movies | Editorial Whenever a movie is made out of an adaptation of a book, the pressure is much more. Such was the case with Sonam Kapoor’s The Zoya Factor.

Sonam Kapoor (Zoya Solanki) works in an advertising firm as a junior copywriter. Her dreams and aspirations are big but her screwing up nature holds her back in many ways. She is a die-hard fan and admirer of the Indian cricket team captain Nikhil Khoda whom she gets to see and love only in advertisements. Like, say Dairy Milk’s ‘Kiss me…close your eyes and miss me’, to Nerolac Paints. For a moment, you might just wonder whether you are watching a movie or paid advertisement screenings of Dairy Milk, Nerolac Paints, and Pepsi.

Zoya screws her first few copywriting assignments and fails to deliver, which lands her in a position where she is almost fired by her boss. However, her boss sees potential in her and gives her an opportunity and sends her to a mega project where their client ‘Pepsi’ will be shooting advertisements with Team India. In the process, Zoya meets Indian cricket captain Nikhil Khoda and the two after a bit of struggle manage to finally get along with each other. Nikhil Khoda as the captain of the Indian cricket team only believes in hard work and dedication but he has a team filled with people who believe in superstitions. As Zoya meets the Indian team, they talk and discuss to find out that Zoya was born in 1983 on the day that Kapil Dev and his army won the Prudential Cup. This excites the other players in the Indian team and when they hear stories about how Zoya used to help her brother and his district team help win cricket tournaments, a superstitious Indian team feels Zoya might be a lucky charm for them too and in the process, they request her to stay back. Although Dulquer, aka Nikhil Khoda, isn’t in favor of Zoya being around due to the luck factor, he too enjoys Zoya’s company and flirts with her to eventually start dating.

With Zoya being around, the Indian team sees a huge turnaround in their results and from losers, they earn the tag of champions where be it any opponent, Sri Lanka or Bangladesh, they beat them all. Although Nikhil believes it is because of the team’s efforts, the rest of the team gets more superstitious about the fact that they won the matches because of Zoya’s presence. An irate Nikhil rushes to Zoya and confronts her, asking her to leave the team right away as he feels she is responsible for the team’s self-belief going down.

To add to Nikhil’s woes is teammate Robin, aka Angad Bedi, who is an extremely insecure player and has problems with Nikhil because he apparently got the team’s captaincy and not him. As he figures out that there’s some spark between Nikhil and Zoya, he fills Zoya’s ears to make her believe that Nikhil is actually playing with her just because she is lucky for the team. Somehow Zoya falls into the mess and misunderstands Nikhil and ends up signing the 1 crore lucky mascot contract that she received from the Cricket board earlier but rejected because of Nikhil. There’s a tussle of egos between Zoya and Nikhil until Zoya is eventually transformed into a Woman God kind of figure by the Indian crowd who ends up believing that it is only because of Zoya that India is winning. A guilty Zoya realizes that her actions have been extremely malevolent and pernicious to Nikhil as she believes that later even if India wins the all-important World Cup, she will be given the credit for the same and not the team captain. So a fed up and dejected Zoya runs away from the situation and as she isn’t present in the last and final match, the Indian crowd turns its back on Zoya and gives her the tag of anti-national. Eventually, a fierce and strong captain in Nikhil Khoda manages to make his team believe that they have been the few selected ones to represent the country in a population of 1.2 billion because they earned it and deserved to be there and not because of any ‘stupid’ luck factor. This motivates the team, much to the desolation of Robin, who feels he has to do something really bad to earn the Indian captaincy back by getting into foul play. However, no matter how much he tries to ensure India loses the World Cup by playing slow, Nikhil manages a plan to get him out and eventually a determined Indian team manages to cross the line and win the Cup.

To sum it up, in the climax to make it a perfect ending, Dulquer and Sonam realize their mistakes, apologize to each other and in the end, it’s an expected over the top happy ending.

IWMBuzz Verdict: The story of the film is extremely weak. Whenever you try to co-relate the story of the film with reality, about what it would be like if the real Indian Cricket Team actually had something like this happen to it, you might just scratch your head to struggle to even believe it. I mean, out of nowhere, a junior copywriter suddenly getting a 1 crore deal with the Indian board for being ‘lucky’ for the Indian cricket team and then also simultaneously turning into a God woman for the whole country where people literally start to idolize her and touch her feet, it’s too much to actually believe for any sane mind. Yes, the movie has its moments and punchlines where you will have a lot of laughter but the crux of the matter is always the story and that’s where Abhishek Sharma lets us down. The screenplay looks tight and crisp but it’s the impractical approach of the whole story that makes everything look only average. The direction is only average and you might struggle to understand whether you are being fed in advertisements or a film. The only good thing about the movie is that the chemistry between Dulquer and Sonam Kapoor is interesting and Sonam Kapoor just manages to look pretty in the movie. ‘Just pretty’ if you may note. The best part of the movie is Sanjay Kapoor and Dulquer Salmaan, and some of the best moments in the movie happen performance-wise when they both are in the same frame. Overall, The Zoya Factor demands to be viewed if you are a big-time fan of Indian cricket or Sonam Kapoor or Dulquer Salmaan. If not, you might just struggle to understand what’s happening. Yes, there’s a lot of scope for enjoyment but everything is a letdown when the story is weak and that’s where The Zoya Factor is a little bit of a turn-off. 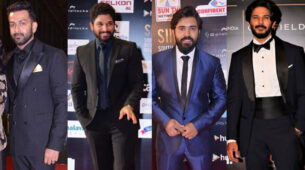