Would you love to watch Shoaib Akhtar and Sachin Tendulkar encountering each other? Well, before answering, you should know a little history first. Have a look! 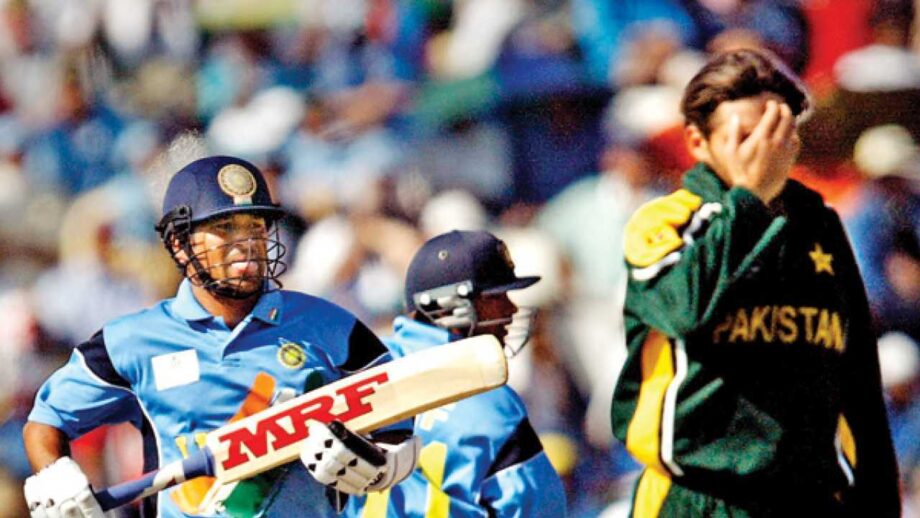 Shoaib Akhtar, who is also known as ‘Rawalpindi Express’, was a former Pakistani cricketer. He is now a commentator and a YouTuber. Whereas, Sachin Tendulkar – the ‘Master Blaster’, has served the Indian cricket team for a few years, and is regarded as one of the greatest batsmen of all time. Akhtar was a great bowler in his times, and sometimes his spins were really difficult to handle. The cold war between the two former players is still on.

Many did hear about the “Beta beta hota hai, baap baap hota hai” dialogue by Virender Sehwag, the former Indian batsman in the 2003 ICC Cricket World Cup. This was said by Sehwag to Shoaib, by pointing towards Sachin. This controversy was really famous then, but it didn’t involve Sachin much.

Shoaib and Sachin, never had a big disagreement on the field. Rather Shoaib used to adore and consider him as “greatest batsman of all time.” Recently, through one of his Instagram videos, in the last month in April, he recalled the 2003 World Cup match when Sachin dispersed at 98. Although they were considered as the biggest rivalries, he always enjoyed bowling to him.

Tendulkar did hit a memorable knock in that match against Pakistan, where he scored 98 runs with cramps. It was disheartening for Shoaib to see him dispersing without scoring a century. He mentioned in a Helo live session, this month, “I was very sad because Sachin got out for 98. It was a special inning; he should have touched the century mark. I wanted him to slam the ton. For that bouncer, I may have loved to see him hit a six, as he did it before.”

Seeing them together in the field, and encountering each other again will be so exciting for the fans. The two legendary cricketers of all-time have no doubt left their remarks in the cricket history. Shoaib Akhtar Vs Brett Lee: Who Was The Fastest Bowler In Cricket History?