These two left-handed batsmen have been the opposition's nightmare due to their attacking style. Who do you think is the perfect attacking opener for T20? Gautam Gambhir or Shikhar Dhawan Gautam Gambhir has been one of India’s most dependable left-handers. Gambhir is an attacking stroke maker who went about run-scoring at a quick pace. He is known for his massive shots and attacking style right from the beginning of the match. This style of play has helped him score some big runs in T20I as well as IPL. Gautam Gambhir represented India in T20I for a period of 5 years, but what a display of talent!

On the contrary, we have another left-handed batsman, Shikhar Dhawan. He is by far the most explosive left-handed opener to play for India. Dhawan packs a punch with his attacking stroke play, getting the team off to some fliers. On his day, Dhawan is unstoppable and becomes the opposition’s worst nightmare. A natural stroke-player, Dhawan has the gift of picking the line of the ball early and the length of the ball, allowing him ample time to get into position for any shot that he wishes to play. His statistics in T20I and IPL speak volumes of his attacking style of batting.

Let us know who among these two you find to be a perfect attacking opener for T20. 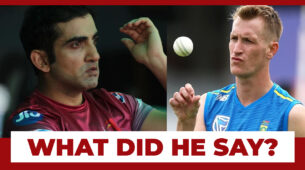