If you haven’t checked out Akriti Sharma and Myra Singh’s Tik Tok battles yet then you have no idea what you are missing! Kullfi Kumarr Bajewala’s little actress Aakriti Sharma needs no introduction and her talents are all over social media as well! However, this show has tons of adorable child actors and Myra Singh surely tops our list as well. Besides, both these stars are hitting it quite well, on-screen with Kullfi Kumarr Bajewala and even breaking the internet with their very adorable stints on Musically and Tik Tok app.

Actress Aakriti Sharma and Myra Singh of Kullfi Kumarr Bajewala are both the leading child artists who are gaining popularity on these apps with their humorous and sweet enactments. Be it famous Bollywood dialogues or super-hit songs or just small video clips and gimmicks about everyday life, both these artists are totally enjoying their “battle” to know who is more loved and viewed. These short videos took no time to go viral and before they knew it, even co-star Mohit Malik (plays Sikander on Kullfi Kumarr) was seen doing their version of cameos for these little stars.

These two pretty television actors are in much demand amongst their young fans children and parents alike! They might be battling with words and songs and videos but these eye-candies are totally being adored by the viewers and we love every bit of this battle! 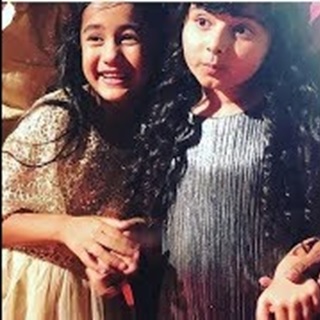 These battles are not for real, as the name suggests, but for pure entertainment and fun. Viewers enjoy this Tik Tok battle where the two beautiful actresses have taken the online viewers by a big surprise by adding their features on this entertaining app.

You can view the daily updates related to dancing, dialogues and comedy on Tik Tok app by these two munchkins. Subscribe to their channel to get unlimited fun, entertainment and adorableness!