The storytelling in shows airing on Colors is wearing a more stylish look, a conscious deviation from redundant viewing experience, much to the glee of the audience.

Ishq Mein Marjawan is helmed by Beyond Dreams Productions. Makers Yash and Mamta Patnaik over the time have mastered the art of painting a canvas replete with vivid imagery which burst like a bubble and finds its own sweet corner in one’s heart & mind.

Ishq Mein Marjawan is no different. It’s stylish, multihued and the setting in Shimla acts as an icing on the cake.

The plot is relatable and gets a tad predictable, however the treatment is fresh and lures the audience into watching the episodes.

The scene where the psychotic lady killer wipes the blood of her face with disgust after stabbing a woman to death reminds us of Shakespeare’s Macbeth and reflects the workings of the dark contours of the human psyche.

Ishq Mein Marjawan oscillates between multiple sub-plotlines, dangerously merging audience interest. The experience is a cocktail of Hitchcock like thriller and Dilwale Dulhania kind of romance (the scene where the lead hero gets drawn to the girl and a song breaks). Mush and gore are like oil & water, can the makers sync it with élan and finesse? Well, we hope so…

Arjun Bijlani as business tycoon Deep Raichand looks his part and his maturity & experience as a performer lends gravitas to the scenes. Aalisha Panwar as Aarohi is the pivot around which the story revolves. Femme fatale and a serial killer, Aarohi doesn’t bat an eyelid before killing someone gruesomely.  Aalisha does her best to live the character, however it will take some time for her to blend seamlessly with Aarohi. Her character is what many would crave for, as she has a range of emotions to play with and if enacted well, she will smile ear to ear on the red carpet at the award shows.

Vineet Raina as the quirky intelligent investigation office is impressive and acts confident on screen. He is a perfect foil to the otherwise suave and subtle Deep Raichand.

Overall, Ishq Mein Marjawan is a laudable attempt, made with a lot of heart and if it sticks to its core storytelling, should find peace at the ratings chart.

Moving on to the other show, Tu Aashiqui makes an earnest attempt to fix convoluted characters in a humdrum plot.

A musician fallen from grace, admiring his bade papa (godfather like) who eventually gets smitten by bade papa’s mistress seems a ‘seen-there-felt-that’ concoction of Bollywood movies Aashiqui 2 and Agnisakshi.

Aspiration, adultery, inflated egos, unrequited dreams and power of money & fame make the world of Tu Aashiqui dark and demonic, where music is the only succor.

Jannat Jubair’s (Pankit Sharma) thorny yet reassuring relationship with her mother (played by Gauri Pradhan) makes for an intricate watch. Gauri’s character, a failed actress, uses her daughter to live the hi-life. Gauri’s return to television is power packed, yet she comes across a tad jittery in places. Madness when depicted with calculated restrain creates magic, Gauri’s part needs the same.

Jannat, though young, commands screen presence in front of experienced nuanced performers and emotes with poise. Her vulnerability yet the burning desire to break the shackles and live free makes for an immediate connect.

However, the sadist, misogynist Jayant Dhanrajgir enacted aptly by Rahil Azam steals the show. Rahil’s command and style even in inflicting humiliation is both cringe worthy and convincing. He summons all his experience from over the years and empties it in the glass called Jayant Dhanrajgir. He impresses and how.

Music being the core of the show (one of), the title track stays with you, which is a winner, and other minor characters too act their part to hold the narrative together.

Guroudev Bhalla’s Tu Aashiqui is a proverbial old wine in a new bottle, but given the impressive casting, deserves a watch.

IndianWikiMedia would rate Ishq Mein Marjawan 3 and Tu Aashiqui 2.5 stars out of 5. 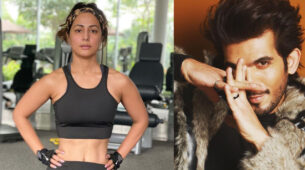 Hina Khan looks super hot as she sweats it out in the gym, Arjun Bijlani loves it 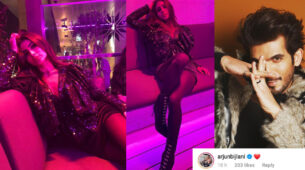