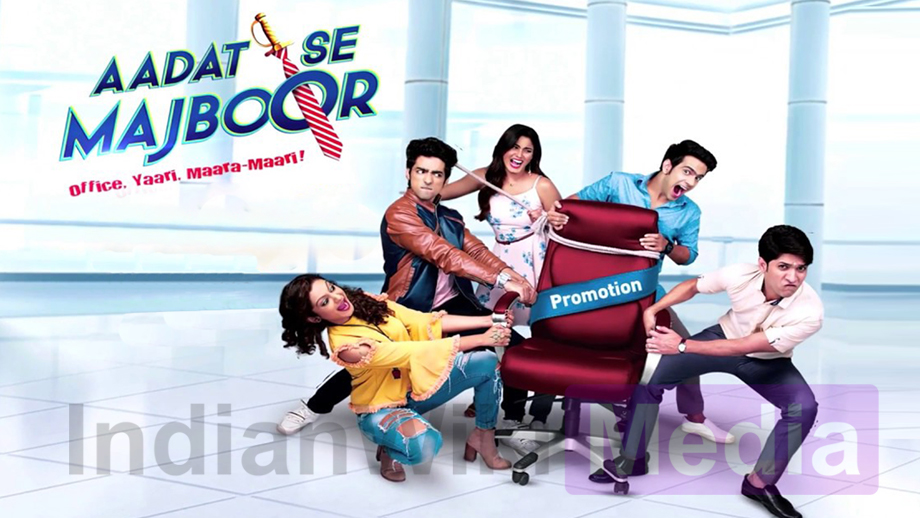 In an attempt to connect itself with the lucrative youth segment, SAB TV which till now was mostly focusing on family audiences has now come up with Team Productions’ Aadat Se Majboor. This office sitcom traces the lives of four youngsters who come to Mumbai and join a mag as sales executives.

The biggest difference between this show and myriad youth content is that SABTV is still maintaining its family outlook; so there are no double meaning jokes and skimpy outfits. Also SAB TV has not played around with a feel good element; so the drama is not edgy and dark (youth content tends to go down that road).

The show followed the western format with a high melodramatic element right in the first episode where one of the above youth is shown jumping from a cliff after messing up the interview. Interesting to know that SAB TV is trying to create shock value too via its tracks!! Well, it was a different matter altogether with the riveting anti-climax in the second episode wherein they got the job as well, courtesy one of the girls ( Riya) who is actually the daughter of the owner, but does not want to tom tom her family name, a dig on nepotism.

Sana Maqbool Khan plays the sweet short dress (not racy) wearing Riya who has the ‘takiya kalam’ of logically speaking. The other leads are fresh faces but they sure have talent. However, the characterization is quite normal for all. Not to forget the hard core women libber Sam (don’t you feel, it has been done to death), the guys are cool. One of the boys is a Gujarati (JD) hailing from under-wear selling family. Sunny is the over smart Delhi tour guide and last but the not the least is a rural guy Rishabh. But there is a twist he is quite smart who will not be taken for ride. All have their respective baggages which add teeth to their narratives.

One scene which made us laugh was when the girl\s tricked the guys to clean their rented apartment and also when they tried to make a pass at Riya, and how she spurned them was fun. Guys will be guys, afterall!! Also the cop who does not think but just acts was nice.

The office set up is complete with the boss, played by veteran actor Ananth Mahadevan and his two assistants, where one has hot for the other. We are sure with all the experience the veteran actor will weave his magic on TV all over again. His character has his own quirks which will bring a smile to your face.

There might be a guest appearance in each episode as the third episode had Krushna Abhishek who came as a motivational speaker and did his mojo. The jokes are funny but they have not really shaken our funny bone yet!! News is rife about Kapil Sharma too making an appearance on the show…

The biggest challenge for SAB TV would be whether it would deploy the idea of entering taboo land (youth romance needs sex) to attract the youth or not!! The test for them would be to handle the subject as delicately as they can. The fear is that if not handled well, they run into the risk of falling between the stools and losing out on their hard-created brand as well. Although youth are heavy spenders, they are equally finicky. So to maintain stickiness is another hurdle to cross.

SAB TV had previously tried to fuse old with new in their just-ended show TV, Biwi aur Main, but somehow it did not do well.

IndianWikiMedia.com gives this SAB TV effort 2.5 out of 5 stars!!