Here is the IWMBuzz.com review of Sony TV’s Patiala Babes. If you talk Punjab, you can’t ignore wife abandonment by wealthy NRI men, which is a major issue across the pinds (villages) of the granary of India. Well, something similar is the story of the new Sony TV drama, Patiala Babes, where Babes, aka Babita (Paridhi Sharma), is dumped by her England-based khasam, Ashok (Bhanujeet Sudan), for another woman, Mitali (Hunar Hali).

As always, the wronged woman has to be picture perfect. Babes has willingly stayed away from her hubby for 17 long years, to take care of her invalid in-laws and nagging, selfish nanad (husband’s sister), who lives with them with her good-for-nothing hubby. The family is complete with Babes’ idealistic father-in-law and stereotypical mother-in-law.  The makers have done their homework and have added jagrata, an essential of Punjabi life.

Babes’ only support system is her daughter, Mini (Ashnoor Kaur), who has just finished high school and now wishes to pursue her dream career of a globe-trotting adventure photographer. Being very social media savvy, she loves to post # pictures online. Not only this, Mini even effectively uses the threat of SM badmouthing to bring a cheating cooler repair man to heel.

Mini also funnily spurns off the proposal of her best friend’s elder bro. The tension on Babes’ face when she hears about Mini getting propositioned was fun and very reflective of desi middle class family fears, of their daughters and sisters going astray.

Paridhi, who had attained fame with Jodha Akbar, is playing the devout sacrificing mother well. Indian society is still very conservative and many women will identify with her trials and tribulations, for a woman is still expected to put her happiness last.

Ashnoor (Yeh Rishta Kya Kehlata Hai fame) is also just right for the chirpy, fun-loving daughter’s role. Her dialogues with God are fun and show how today’s youth is trying to balance religiosity and modernity in its own unique ways. Like any daughter, she too wants her father’s love and attention, which alas, she never gets.

Bad guy Ashok knows that he is wrong, hence does not have the courage to admit his mistakes face to face, and emails a voice message to his sister which is heard by all.

In a bid to further paint his character black, the writers create a situation in which he is forced to come back to India and now wants to move in with his new woman, not caring a fig about what will happen to his legally-wedded wife and daughter.

For once, the creatives have not shown the other woman as a bi*c*. Mitali is not wrong to force Ashok to admit their link-up. Her fear, that his wife has family backing while she has none, is accurate.

From whatever little we have seen so far, and based on our extensive understanding of how desi content works, we are doing the following crystal gazing of the coming tracks.

Well, to start with, Mini will make jilted Babes stand up for herself. But soon, complications will happen with the entry of the male lead (Anirudh Dave). Will the latter have a relationship with the mother? We will not be surprised if Mini too will fancy him, leading to a kind of love triangle. Had there been just a possible on-screen affair between Mini and Anirudh’s character, they would have cast a much younger guy, given that Ashnoor is a teenager herself. Interestingly, Anirudh’s on-screen avatar might also be shown slightly younger than Babes, leading to more Log ki Dassange (what will people whisper).

The acid test here would be viewer acceptance. You need to factor in that today BARC has gone rural; hence, will village and Category C and D towns accept the above revolutionary thought that a woman can/should find love again?

What might work against this Rajita Sharma show under the banner Katha Kottage is that Sony fiction does not boast of great ratings anyways. So if you add the above concept handicap to the mix, it might mean more numbers’ issues. Also, this show and Ladies Special have just replaced KBC, which was a huge ratings spinner. So will Sony wait and give the possible above story enough leg-up to stand on or quickly change to the more traditional saas-babu, suffering woman saga?

Having said this, we appreciate the fact that acclaimed Writer and Producer Rajita Sharma has treaded upon an interesting concept, which is away from the stereotypical stories and plots.

The beginning has been good!! Well, we’ll just have to wait and watch.

We at IWMBuzz.com credit 3 out of 5 stars for Patiala Babes. 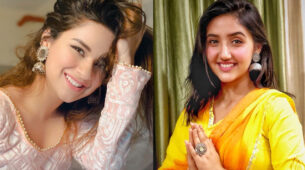 I am really excited to play such an epic character: Paridhi Sharma Hot in Black: Take A Tip from Ashnoor Kaur On How to Carry The Shade