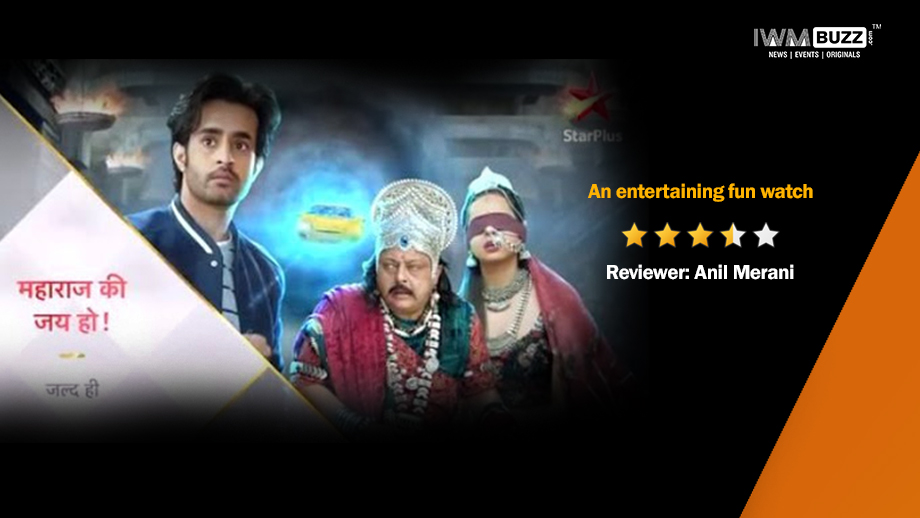 In a time of Coronavirus, a light-hearted TV show can make a big difference in lifting your somber mood.

Star Plus provides the same with new limited series Maharaj Ki Jay Ho. This TroubleMaker Production is a fantasy infused with elements of mythology.

The story starts with a small-time crook Sanjay (Satyajeet Dubey) getting out of jail. He then tries to make it for his wedding with the daughter of the head clerk. The mandap is his govt office.

However, en route, Sanjay is kidnapped by his boss henchmen, who force him to steal a talking car. The car using a Punjabi accent reminded us of Total Dhamaal.

A silly confusion over the kill order allows Sanjay to flee in the car. The bad guys chasing him in a rickety scooter adds to the fun

In the meantime, there is news of scientist Dsouza’s (Ashwin Mushran) disappearance courtesy, a bungled experiment, which takes him the days of the Mahabharata.

Running for his life Sanjay breaks-in into the restricted experiment zone and gets sucked into a black hole, which carries him back to the Vedic age as well as the scientist.

One thing we did not understand how come scientist gets Sanjay’s mobile number sans network. But the text repartee involving God indeed was humorous.

Here, director Deven Bhojani has treated the Mahabharat in a lighter manner. We have funny bungling blind Dhritrashtra (Nitish Pandey) in a constant battle with his arch-enemy Suryabhan (Rajesh Kumar).

Rakhi Sawant’s ex-boyfriend Abhishek Awasthy is the Hastinapura army chef and is as whacked as his emperor.

Gandhari (Monica) is equally nuts; she can’t see any fault in brother Shakuni.

Hastinapura troop hauls Sanjay in the court for his different look, and his conversation is entertaining, his use of English and modern words in contrast to ancient dialect.

Sanjay helps Dhritrashtra free a kidnapped Gandhari. How he pulls the wool over the eye of Suryabhan brought a smile to our otherwise tense face.

But he is forced by Shankuni to take over coaching of brattish Kaurav and Pandav kids and he uses cricket to forge peace among the warring princes.

Soon we have a cricket match between teams Suryabhan and Dhritrashtra. Old jokes like chit mein jeeta pat mein hara are used.

The ancient commentator using written text to pronounce cricket, which will only start thousand of years later, was fun.

All in all, we have liked all the four episodes, but yes at the time it does drag a bit. Satyajeet, who has returned to TV after year is good as Sanjay. Through him, the makers want to give out the message that war is not the solution to any dispute.

His love story will open. It will be interesting to see how he can romance his girl who is loving in the present while he is now 5000 years in the past.

Ashwin is cute with his broken Hindi. He also keeps trying to find oranges as he is masquerading as a dasi. Shakuni thinks something is cooking between him and Sanjay as they keep hugging each other.

Nitish is spot-on as the blind emperor.

More then the lead Satyajeet, we think the real credit should go to Nitish and Rajesh for it is their poker face antics which holds the show together.

Rajesh is successfully able to break out of the Roshesh Sarabhai mold and bring out a whole new comic person. e.g the swimming pool scene.

For Star, an already ready Maharaj Ki Jay Ho was the perfect stop-gap fill till we see the big-ticket show Anupama. Originally it was supposed to be a 26 one hour episode series. But now they will be broken into 52 daily ones.

Ideally, though such an off beater concept requires substantial publicity, currently, we are sailing in uncharted lockdown territory, though.

Any new software will help keep the audiences clued into StarPlus till things get normal. And being limited and low budget, lower TRP will not harm.

Alternatively, since all are home, it might just turn out to be a sleeper hit.

It definitely deserves a 3.5 out 5