Reading Ekta Kapoor’s amazing celebrity baby news, alongside Tusshar Kapoor’s and Karan Johar’s, makes me pensive about the whole concept of surrogacy. Surrogacy, as we all know, is a process where a woman agrees to carry a pregnancy for a couple that is in complete need of having a baby.

This word here, “Baby”, in itself speaks a thousand emotions. The wonderful feeling that a baby gets along with her/him is absolutely valuable. Of course, there are many reasons why a couple or an individual might choose to consider surrogacy as an option, for example, age, medical complications, single parenthood, LGBTQ couples, unexplained infertility, hysterectomy or illness, uterine scarring, complications in past pregnancies and other medical conditions.

But I am more interested in the decision-making process. Recently, in conversation with a friend of mine who thinks that surrogacy is just a new ‘trend’ for high-powered career women who have this fear of ‘ruining’ their bodies and are afraid to give birth and so on, I had a strong difference of opinion with her. The reasons, as I explained to her, for hopeful parents to opt for surrogacy, are many and varied. And whatever be the reason, the choice to do it is just that – ‘a choice’. And none of us has the right to weigh the positives or negatives of a decision taken by somebody else. With the advancement of our progressive society (hopefully), wherein celebrity role models like Ekta Kapoor, Karan Johar, Tusshar Kapoor have taken advantage of the availability of surrogacy as an option, it has definitely set society norms into motion, by making it a viable path to consider if one wants to build a family.

I remember when actresses Nicole Kidman and Sarah Jessica Parker announced that they had had babies through surrogacy, the internet just exploded, with so many allegations flying around that they were lying, they wanted to avoid risking stretch marks, didn’t want to disrupt a film schedule, and on and on went the accusations. So selfish! So shallow! So unwomanly! These were the insensitive pronouncements made. I feel it’s a choice and it has to be respected and appreciated. And it may come as a surprise to all that surrogacy did exist in ancient times; and if I am not wrong, it is broadly stated in our very own Hindu mythology, and was practiced, socially accepted and cherished in ancient times. And so I feel it continues to flourish and is being vastly preferred over adoption. Both surrogacy and adoption are gratifying experiences that allow the soon-to-be parents to complete their families; and let me be very clear there is absolutely no right or wrong decision; just the decision that is right for the parents and for the family as a whole. The surrogacy process allows the parent to be a part of their baby’s life right from the beginning and those bonds are set in motion from day one. This in itself could be a major reason why surrogacy is a preferred option.

All throughout the years while studying psychology, and being the Watson (American psychologist who established the psychological school of behaviourism) fan that I am, I believe that yes, nurturing is equally recognised as the most important determinant, as important as heredity, for the development of the child’s personality. Parenting has to be done right in every sense. I am very sure that parents opting for surrogacy certainly know this. Congratulations and Good Luck to all the new parents. 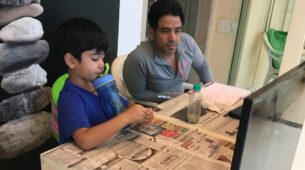 Here's how Tusshar Kapoor is keeping himself busy during lockdown