Teejay (Karanveer’s wife), Bhuvaneshwari (Sreesanth’s wife) and Abhinav (Surbhi’s brother) came over to defend their family members against others in the presence of the host . 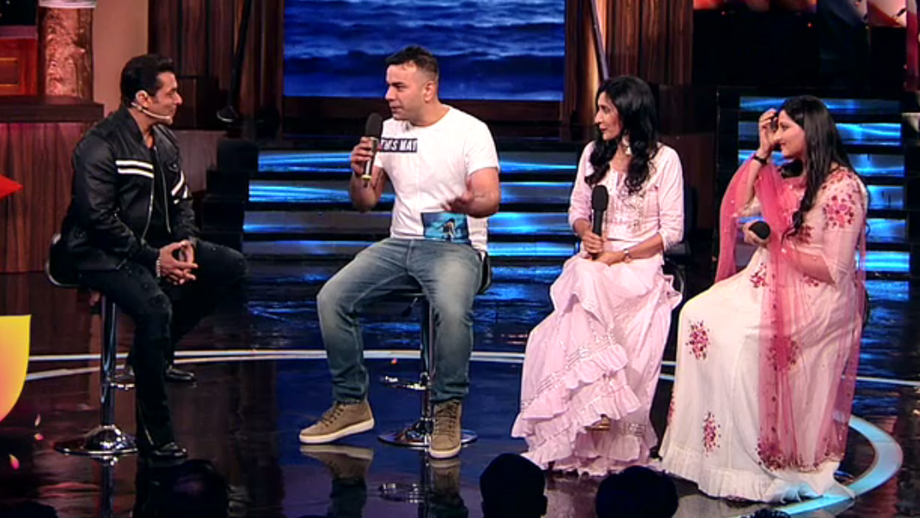 Feuds and verbal brawls are a daily affair but there are times where contestants forget their personal differences and share a laugh or two. After Surbhi decided to show Sreesanth the way to Kalkothari using her captaincy power, the tensions in the house has only worsened. That’s when Bigg boss lightened the mood with Riteish Deshmukh’s sparkling entry that brought a big smile on everyone’s face. The versatile actor came to promote his upcoming marathi movie, Mauli in which he plays the role of inspector Mauli.

Riteish told the in-mates that he’s been informed about the aggravating law and order in the house and today he will have all ears to complaints which contestants have against each other. He not just patiently heard the complaints and accusations, but also registered FIR’s and gave fun punishments to the guilty contestants. This brought out a wave of cheer from everyone. Deepak called out at Karanveer’s ‘chachi-giri’, saying he often puts fuel to the fire in many arguments between inmates and is thus also called ‘Naag’ for this habit. Inspector Mauli punished Karanveer by directing him towards a chakki machine.  Whereas, Romil complained about Rohit’s secret stealings from the luxury budget. Rohit was thus asked to surrender his stolen possessions. After the amusing session, Riteish made a swift exit from the house, leaving everyone smiling from ear to ear.

Later, the celebrated actor went on to challenge Salman Khan in translating Hindi lyrics into Marathi and the duo also re-created the funny- drunk sequence from their movie Lai- Bhari. Salman then asked a bunch of random questions to Riteish which was put into a funny script enacted by both.

The viewers are in for another surprise as Teejay (Karanveer’s wife), Bhuvaneshwari (Sreesanth’s wife) and Abhinav (Surbhi’s brother) came over to defend their family members against others in the presence of the host . The defensive counter-arguments laid out by all three, proved their love for their family members inside the house.

Like every weekend ka vaar special, this time around Salman announced that Jasleen and Somi will be up against each other for the Sultani Akhada. The host then briefly also hinted towards the impending evictions and the possibility of a dual exit. Jasleen and Somi gave each a tough fight, while Romil was made the judge for every round.