Iss Pyaar Ko Kya Naam Doon Producer and lead cast indulged in a hearty live chat on the completion of the show’s 9 years. 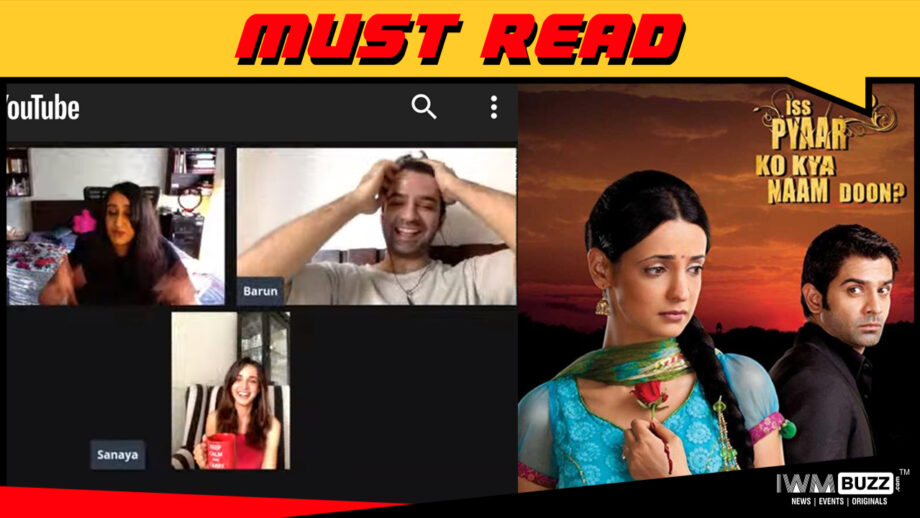 Iss Pyaar Ko Kya Naam Doon the cult popular show of the yesteryears that beamed on Star Plus is even now a trendsetter and this was visible with the kind of reactions pouring in when the Producer Gul Khan had a LIVE chat with lead actors Barun Sobti and Sanaya Irani today.

Well, the show Iss Pyaar Ko Kya Naam Doon completed 9 years’ glory and the Producer and lead actors decided that it was the right time to get nostalgic about the show they created together.

Arnav Singh Raizada and Khushi’s love story has been an iconic ride and we have seen the Jodi being loved by innumerable fans.

The live chat that we at IWMBuzz.com attended was real fun and had the trio in the best of their moods

From monologues like ‘Barun looking high during his audition’ to Sanaya calling Barun ‘ Yeh  muje actor nahi lagta’ to Sanaya doing really bad in her audition and struggling with her Hindi, the three of them spoke of the way it all started.

Barun talked about leaving a finite show offer to be part of Iss Pyaar Ko Kya Naam Doon. He also said that his takeaway from this character was that it was fine for a male to be sensitive. Also, he thanked his stars for the kind of friends he has made through the show.

For Sanaya, though she had no such takeaway from the character of Khushi, this was one show she is even loved for today. Khushi the character made her a household name, and Sanaya felt happy that there are people calling her by that name even today.

While Barun called Sanaya as a ‘loving and fun to be with’ girl, Sanaya told that Barun was a ‘loving, sarcastic but great working partner’.

The chit-chat was lively all the way and Producer Gul Khan had some splendid questions to throw at her evergreen show’s lead pair.

Truly worth watching this live chat for all the loyal fans of the show, Iss Pyaar Ko Kya Naam Doon!!

We end this piece of story by congratulating Gul and the leads, Barun and Sanaya for this magical masterpiece of a love saga.

Only if we could get another show with the same lead cast!!