Ek Bhram Sarvagun Sampanna 5 July 2019 Written Update of today’s episode we see how Ppja threw mud on Kabir and mocked him for not getting a job in dirty clothes. Today’s Ek Bhram Sarvagun Sampanna 5 July episode begins with Dhruv reminiscing oh his and Janhvi’s (Shrenu Parikh) moments together. He got upset and threw the drink. Kabir informed everyone about his certificates and inquired about Dhruv. His mother told him that Dhruv was very upset and disturbed. Suman’s heart broke looking at her son drinking. He was going through a tough time and got angry at Kabir. Kabir demanded Dhruv to vent out his angry instead of holding it in since he needed his brother’s support at a tough as such.

Pooja found Kabir standing a bus stop and intentionally splattered mud on him with her car. She got off the car and towards him to mock him and told him he would never get a job with such dirty clothes. Kabir told her to take a glance at her watch and warned her that her time was going to change for bad. She threw her watch and told her that the bad time was gone.

She was about to fall but was saved by Kabir. He challenged her saying when he will throw the mud, the whole world will be witnessing. Everybody was stunned to see Pooja in her new avatar. She announced that whoever wanted to work for Mittal industries to take their last salary and leave. Mr. Chopda volunteered to work for Sharma industries. She ordered to break the board of Mittal textiles. Mr. Chopra supported her for her decision. She told Mr. Chopra that she wished to make garment her main business. She called Amma for support as she was nervous. Amma comforted her and informed her that Kabir had come to visit. The written update of 5 July 2019 Ek Bhram Sarvagun Sampanna episode full story ends here.

In the upcoming episode of Ek Bhram Sarvagun Sampanna, watch Kabir challenges Pooja that she would beg him to hire her in her firm one day. Stay tuned! 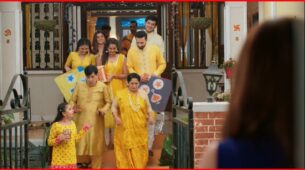