In today’s episode of Khatron Ke Khiladi of 12th July 2020, we see contestants compete among each other with the help of their friends

Today’s episode of Khatron Ke Khiladi 10 (Colors), 12 July 2020 starts as we see all the top six contestants getting ready to face a new level of fear as all of them meet their friends who will be accompanying the contestants in their stunts for this week. All the fun and fear will be enjoyed by the contestants and their friends. Congratulations to Dharmesh and his friend Amar as they won’t be performing the stunt as Dharmesh has won direct entry into the finals.

To start with, all contestants introduce their friends to Rohit Shetty, after having some fun with the contestants and their friends, Rohit Shetty explains the stunt to them. Shivin goes in first to perform and his friend Smriti supports him in this stunt, but just as usual Shivin finds is difficult to perform this stunt but keeps on with it. At one point we see Mahira’s shoe ring getting stuck with which Shivin helps her set free. But after collecting flags we see Shivin aborting the stunt. Balraj along with his friend Shaleen goes in next. They start and continue the stunt with great energy, but in the end Shaleen aborts the stunt as he gets submerged in water. Finally, Karishma goes in to perform the stunt along with her friend and ex-contestant Salman Yusuf and with Karishma’s height and Salman’s experience the duo completes and wins the stunt. Because of the average performance from Shivin, he receives the fear phunda.

As we go on to the next stunt location, the audience gets to witness a beautiful romantic dance of the stunt winning duo Karishma and Salman. Rohit now explains the new stunt to the contestants to be performed by Tejasswi and Karan along with their friends as their partners. Tejasswi and her friend Kabir are supposed to perform the stunt first, but, Tejasswi expresses her discomfort to perform this stunt as she tells Rohit Shetty of her wish to quit the show because of her last night’s experience. But, Rohit, convinces to go on with the stunt. Both of them start the stunt. Tejasswi, as usual, is seen to give her best and complete the stunt easily. Now, it’s Karan and Abhishek’s turn to give their best and win the stunt. After taking some time for himself, Karan starts and completes the stunt. The results tell us Tejasswi-Kabir completed the stunt in 1 minute and 40 seconds and Karan- Abhishek duo completed the stunt is 1 minute 33 seconds, hence this makes Karan a winner by only 7 seconds. Dharmesh and Amar are asked to perform the stunt for fun purposes.

The next stunt is going to be performed by the fear phunda holders Tejasswi and Shivin along with their partners, Rohit Shetty explains the dynamic stunt to the performers. The stunt is performed by both the duos together. The stunt starts off with great energy among the performers, and we see Tejasswi being very quick in completing the stunt and Shivin is the one who goes into the elimination stunt and Tejasswi gets free from the fear phunda.

It will be interesting to see who makes it to the finals and who goes home in the semis. Stay tuned to IWMBuzz for more such detailed information. 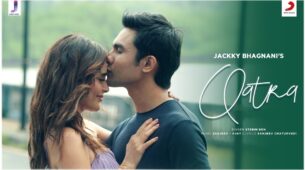