Today’s episode of Khatron Ke Khiladi Made In India (Colors) starts as we get to the see the dynamic return of Khatron Ke Khiladi Ring Master Rohit Shetty. The contestants are quite pleased to see him as they have fun with each other. We also get to see the first wild card entry of the season who is none other than comedy queen and Harsh Limbachiya’s wife Bharti Singh.

Now, it is time for the first stunt of this weekend. A true dynamic stunt in which we get to see the amazing driving skills of Rohit Shetty himself. This stunt is performed by Harsh Limbachiya and Nia Sharma. Harsh performs the stunt first and completes it, Nia goes in next and also completes the stunt. The results tell us that Harsh and Nia got 3-3 legal flags so according to the timings, Nia is announced winner of this stunt and first fear phunda of the season goes to Harsh Limbachiya.

The contestants move to the next stunt location. This next stunt is going to be a partner stunt. Karan Patel-Bharti Singh and Karan Wahi-Jay Bhanushali are paired up for the stunt. Will Karan Patel or Bharti Singh Abort because of their clostrophobia? Or will they be able to beat Wahi and Jay to win the stunt. Wahi and Jay go in to perform the stunt and complete it. Bharti and Patel go in next. It is a real test for Karan and Bharti to overcome their worst fear as we have seen them both abort similar stunt in their reepective seasons. They do overcome the fear as they complete the stunt. The results also come out in their favor as they beat Wahi and Jay by almost two minutes.

‌The contestants return to the Julmcity for next stunt. Another dynamic stunt for the day. Rithvik, Aly and Jasmine will be performing this stunt. The champion jacket winner Rithvik decides to go in first to perform this stunt. With some hardships he is unable to complete the stunt. Aly goes in second. But is not ready to start the stunt and aborts. Will Jasmine be the one to complete this stunt? Let us see as she goes in next. She does complete the stunt and comes out winner of the stunt.
‌This concludes the episode as we see Aly and Rithvik get the fear phunda. So it will be interesting to see in tomorrow’s episode, who will be the first elimination of the season. 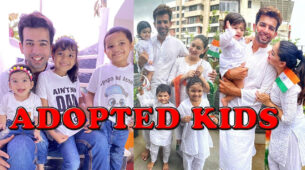 Do You Know That Jay Bhanushali And Mahhi Vij Have Adopted Two Children? I performed purely to win this time: Nia Sharma on Khatron Ke Khiladi Made in India