In Kumkum Bhagya written update 3rd March 2020 episode Maya’s parents come to Ranbir’s house with shagun. Later Rhea accuses Prachi of creating all problems. Prachi tries to ignore Ranbir but he tells her that he feels hopeful because of her. The episode begins with Ranbir coming back home and the family pulls Vikram’s leg. Maya’s parents come to Ranbir’s house but Beeji closes the door telling nobody is home. Vikram opens the door again and apologizes telling Beeji didn’t recognize them. Maya’s parents come with the Shagun for engagement. Maya’s father hugs Ranbir and tells him that his father should be sensible like him. He tells them about a man named Vishnu who was killed and his family ruined and adds that whatever happened with his family can happen with anybody’s family. While leaving Maya’s mother invites Prachi.
Rhea accuses Prachi of all the things happening between Ranbir and Maya. She warns her to stay away from Ranbir ad leave them alone. Pallavi also says the same thing but Ranbir, Vikram and Beeji support Prachi. Ranbir says that it was his plan to confess from Maya and she just helped him. Ranbir asks Rhea wouldn’t she support him if he asked for her help. Prachi and Ranbir leave for office and Vikram explained Rhea that she can’t blame Prachi for everything that is happening. Pallavi assures Rhea that they won’t let Ranbir and Maya marry.
Ranbir has flashbacks about the engagement announcement and Prachi thinks of all that happened at Ranbir’s place.
Ranbir calls Prachi to his office with a file but she sends it with somebody else. Ranbir confronts Prachi as she ignores him. Beeji says that Rhea was wrong to accuse Prachi but Pallavi still points fingers at Prachi. Beeji understands that Pallavi has something in mind about Rhea and Ranbir. Prachi tells Ranbir to stay away from her and blames herself for all the problems. Ranbir tells her that it was his fault and not his and the time is wrong. He is happy that he has a true friend is all this mess.
Maya’s mother enters in her room while she has Rhea’s necklace in her hand. She lies that Ranbir gifted it to her and recalls Ranbirs confession. Maya says that the wedding will happen and nobody can stop it.
Back in the office, Ranbir tells Prachi that she gave him the hope and strength to fight the situation and confesses that he likes her being with him, he feels safe with her and asks her to not leave him. In the end, they apologize for their behaviour. 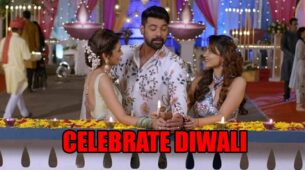